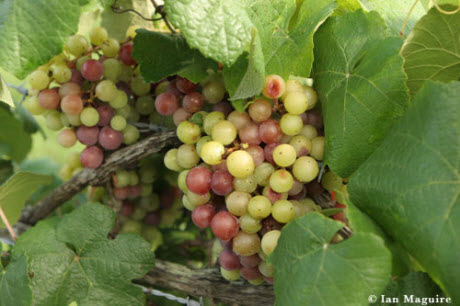 Oil from the seeds of Muscadine grapes, seen here, produces a form of Vitamin E that can help reduce obesity, according to a new UF/IFAS study from food science and human nutrition Professor Marty Marshall.Photo Credit: UF/IFASThe oil may help mitigate the formation of new fat cells because it produces tocotrienol, an unsaturated form of Vitamin E, said Marty Marshall, a UF professor of food science and human nutrition.

Muscadine grape seed oil would be a valuable addition to the market of edible oils because it is a unique source of tocotrienol in addition to being a good source of mono- and polyunsaturated fatty acids, Marshall said. In addition, scientists anticipate that muscadine grape seed oils fortified with additional tocotrienol from underutilized muscadine varieties could be developed to help stem obesity.

Before this study, scientists attributed most tocotrienol benefits to red palm and rice bran oil. In fact, recent studies have shown that rice bran oil helps lower cholesterol. With the new findings, muscadine grape seed oil could be considered a superior source of tocotrienol, said Marshall, a faculty member at UF’s Institute of Food and Agricultural Sciences.

For the study, published online in the journal Food and Function, scientists took muscadine grapes grown near Tallahassee and, working in a UF/IFAS lab, extracted oil from the fruit’s seeds. They found the content of unsaturated fatty acids reached 85 to 90 percent of the total fatty acids.

Muscadine grapes – with thick skin and large seeds — grow in the South and are used to make wine and juice. Each year, thousands of tons of the solid byproduct pomace emerge after wine and grape juice production. Traditionally, most of the pomace goes to landfills as waste. But some wineries use the muscadine grape seeds for oil. Some of it even shows up in specialty stores, Marshall said.

“Our interest has been to find a value-added capability of these waste streams,” he said, adding that this may be another use for the grape “waste.”

In previous studies, Marshall and his colleagues focused on antioxidants in grape skins.