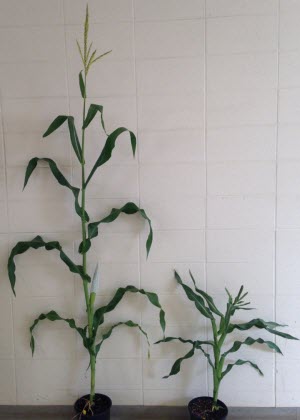 From left, normal and mutant maize plants are shown.Photo credit: UC RiversideRIVERSIDE, Calif. — How plant cells divide and how that contributes to plant growth has been one of the longstanding unsolved mysteries of cell biology. Two conflicting ideas have fueled the mystery.

The first idea is that cells divide merely to fill space in plant tissue, and therefore the orientation of the division is unimportant to growth. In other words, the contribution of individual cell behavior to overall growth isn't very important.

The second idea is that individual cells are the basic unit of life and their individual programs eventually build an organism. In other words, each new cell created contributes to proper patterning of the tissue. In this case, the orientation of each cell's division is critical for how the plant tissue is patterned and also impacts growth.

New findings by a University of California, Riverside-led team of researchers, lend support to the second idea, that the orientation of cell division is critical for overall plant growth. The work was just published in the journal Proceedings of the National Academy of Sciences.

The researchers, led by Carolyn Rasmussen, an assistant professor of plant cell biology at UC Riverside and Pablo Martinez, a graduate student working in Rasmussen's lab, together with Anding Luo and Anne Sylvester at University of Wyoming, were working with a maize mutant, called tangled1, with known defects in growth and division plane orientation of cells. Division plane orientation refers to the positioning of new cell walls during division. 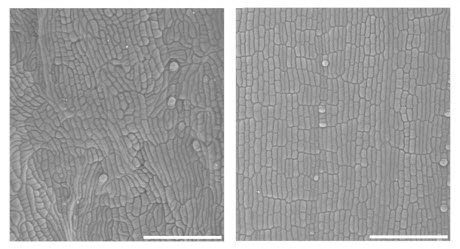 These are scanning electron micrographs of maize epidermal cells. Left is the mutant variety. Right is the wild variety.Image credit: UC RiversideThey used time-lapse live cell imaging that represented hundreds of hours of maize, (commonly called corn in the United States), cells dividing. The time-lapse of imaging allowed them to characterize a previously unknown delay during cell division stages in the maize mutant. This study clarified the relationship between growth, timely division progression and proper division plane orientation.

The findings might have long-term implications for increasing agricultural production. For example, during the Green Revolution of the mid-20th century, researchers developed short-stature, or dwarf, wheat, and rice varieties that led to higher yields and are credited with saving over a billion people from starvation. Understanding the molecular mechanisms of plant growth might contribute in the long-term to developing more suitable short-stature maize varieties.