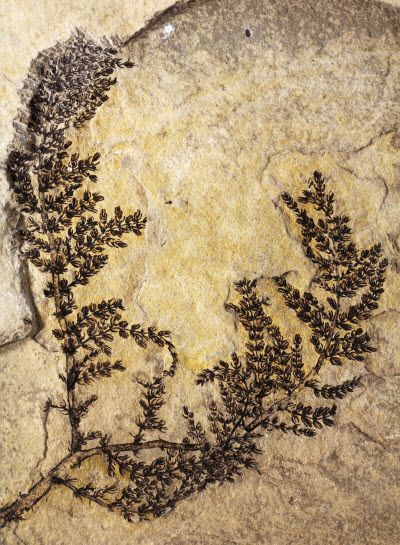 A large intact specimen of the fossil, Montsechia. Usually only small fragmentary pieces of the fossil are found.Photo credit: David DilcherBLOOMINGTON, Ind. -- Indiana University paleobotanist David Dilcher and colleagues in Europe have identified a 125 million- to 130 million-year-old freshwater plant as one of earliest flowering plants on Earth.

The finding, reported Aug. 17 in the Proceedings of the National Academy of Sciences, represents a major change in the presumed form of one of the planet’s earliest flowers, known as angiosperms.

"This discovery raises significant questions about the early evolutionary history of flowering plants, as well as the role of these plants in the evolution of other plant and animal life," said Dilcher, an emeritus professor in the IU Bloomington College of Arts and Sciences' Department of Geological Sciences.

The aquatic plant, Montsechia vidalii, once grew abundantly in freshwater lakes in what are now mountainous regions in Spain. Fossils of the plant were first discovered more than 100 years ago in the limestone deposits of the Iberian Range in central Spain and in the Montsec Range of the Pyrenees, near the country’s border with France.

Also previously proposed as one of the earliest flowers is Archaefructus sinensis, an aquatic plant found in China.

"A 'first flower' is technically a myth, like the 'first human,'" said Dilcher, an internationally recognized expert on angiosperm anatomy and morphology who has studied the rise and spread of flowering plants for decades. "But based on this new analysis, we know now that Montsechia is contemporaneous, if not more ancient, thanArchaefructus."

He also asserted that the fossils used in the study were "poorly understood and even misinterpreted" during previous analyses.

"The reinterpretation of these fossils provides a fascinating new perspective on a major mystery in plant biology," said Donald H. Les, a professor of ecology and evolutionary biology at the University of Connecticut, who is the author of a commentary on the discovery in the journal PNAS. "David’s work is truly an important contribution to the continued quest to unravel the evolutionary and ecological events that accompanied the rise of flowering plants to global prominence."

The conclusions are based upon careful analyses of more than 1,000 fossilized remains of Montsechia, whose stems and leaf structures were coaxed from stone by applying hydrochloric acid on a drop-by-drop basis. The plant's cuticles -- the protective film covering the leaves that reveals their shape -- were also carefully bleached using a mixture of nitric acid and potassium chlorate.

Examination of the specimens was conducted under a stereomicroscope, light microscope and scanning electron microscope.

The age of the plant at 125 million to 130 million years is based upon comparisons to other fossils in the same area, notably the freshwater algae charophytes, which places Montsechia in the Barremian age of the early Cretaceous period, making this flowering plant a contemporary of dinosaurs such as the brachiosaurus and iguanodon.

The precise, painstaking analysis of fossilized structures remains crucial to paleobotany, in contrast to other biological fields, due to the current inability to know the molecular characters of ancient plants from millions of years ago, Dilcher said.

This careful examination was particularly important to Montsechia since most modern observers might not even recognize the fossil as a flowering plant.

"Montsechia possesses no obvious 'flower parts,' such as petals or nectar-producing structures for attracting insects, and lives out its entire life cycle under water," he said. "The fruit contains a single seed" -- the defining characteristic of an angiosperm -- "which is borne upside down."

In terms of appearance, Dilcher said, Montsechia resembles its most modern descendent, identified in the study as Ceratophyllum. Also known as coontails or hornworts, Ceratophyllum is a dark green aquatic plant whose coarse, tufty leaves make it a popular decoration in modern aquariums and koi ponds.

Next up, Dilcher and colleagues want to understand more about the species connecting Montsechia andCeratophyllum, as well as delve deeper into when precisely other species of angiosperms branched off from their ancient forefathers.

"There's still much to be discovered about how a few early species of seed-bearing plants eventually gave rise to the enormous, and beautiful, variety of flowers that now populate nearly every environment on Earth," he said.

Other authors on the paper are Bernard Gomez and Véronique Daviero-Gomez of the Université Lyon, France; Clément Coiffard of the Leibniz Institute for Evolution and Biodiversity Science, Germany; and Carles Martín-Closas of the Universitat de Barcelona, Spain.

Support for this research was provided by the French National Centre for Scientific Research, the Spanish Ministry of Science and Innovation, the German Funding Agency and the European Commission, as well as the Indiana Geological Survey and IU Bloomington Department of Geological Sciences.