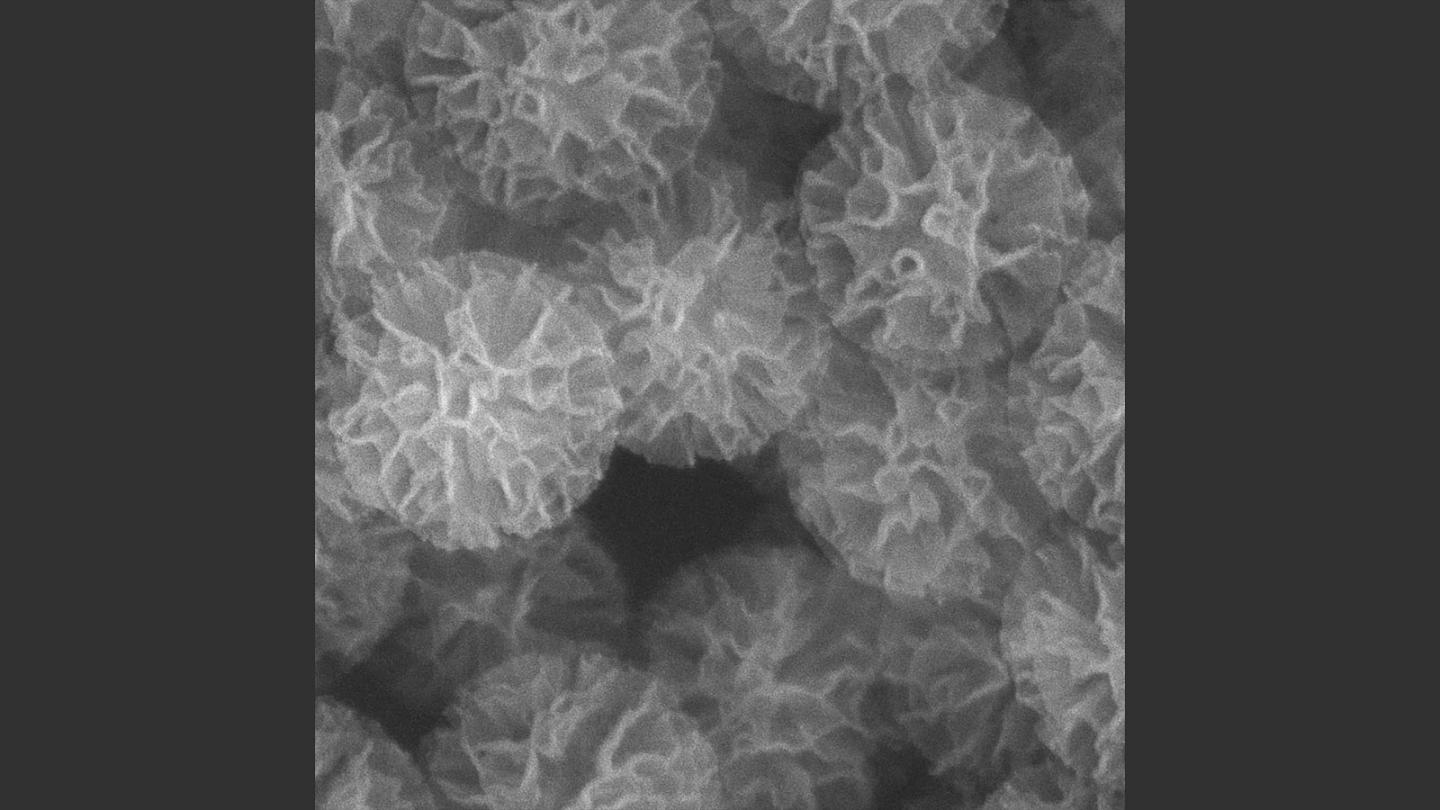 Alzheimer's disease is the sixth leading cause of death in the United States, affecting one in 10 people over the age of 65. Scientists are engineering nanodevices to disrupt processes in the brain that lead to the disease.

People who are affected by Alzheimer's disease have a specific type of plaque, made of self-assembled molecules called β-amyloid (Aβ) peptides, that build up in the brain over time. This buildup is thought to contribute to loss of neural connectivity and cell death. Researchers are studying ways to prevent the peptides from forming these dangerous plaques in order to halt development of Alzheimer's disease in the brain.

In a multidisciplinary study, scientists at the US Department of Energy's (DOE) Argonne National Laboratory, along with collaborators from the Korean Institute of Science and Technology (KIST) and the Korea Advanced Institute of Science and Technology (KAIST), have developed an approach to prevent plaque formation by engineering a nano-sized device that captures the dangerous peptides before they can self-assemble.

"We've taken building blocks from nanotechnology and biology to engineer a high-capacity 'cage' that traps the peptides and clears them from the brain." — Elena Rozhkova, scientist, Center for Nanoscale Materials

The β-amyloid peptides arise from the breakdown of an amyloid precursor protein, a normal component of brain cells," said Rosemarie Wilton, a molecular biologist in Argonne's Biosciences division. "In a healthy brain, these discarded peptides are eliminated."

In brains prone to the development of Alzheimer's, however, the brain does not eliminate the peptides, leaving them to conglomerate into the destructive plaques.

"The idea is that, eventually, a slurry of our nanodevices could collect the peptides as they fall away from the cells—before they get a chance to aggregate," added Elena Rozhkova, a scientist at Argonne's Center for Nanoscale Materials (CNM), a DOE Office of Science User Facility. 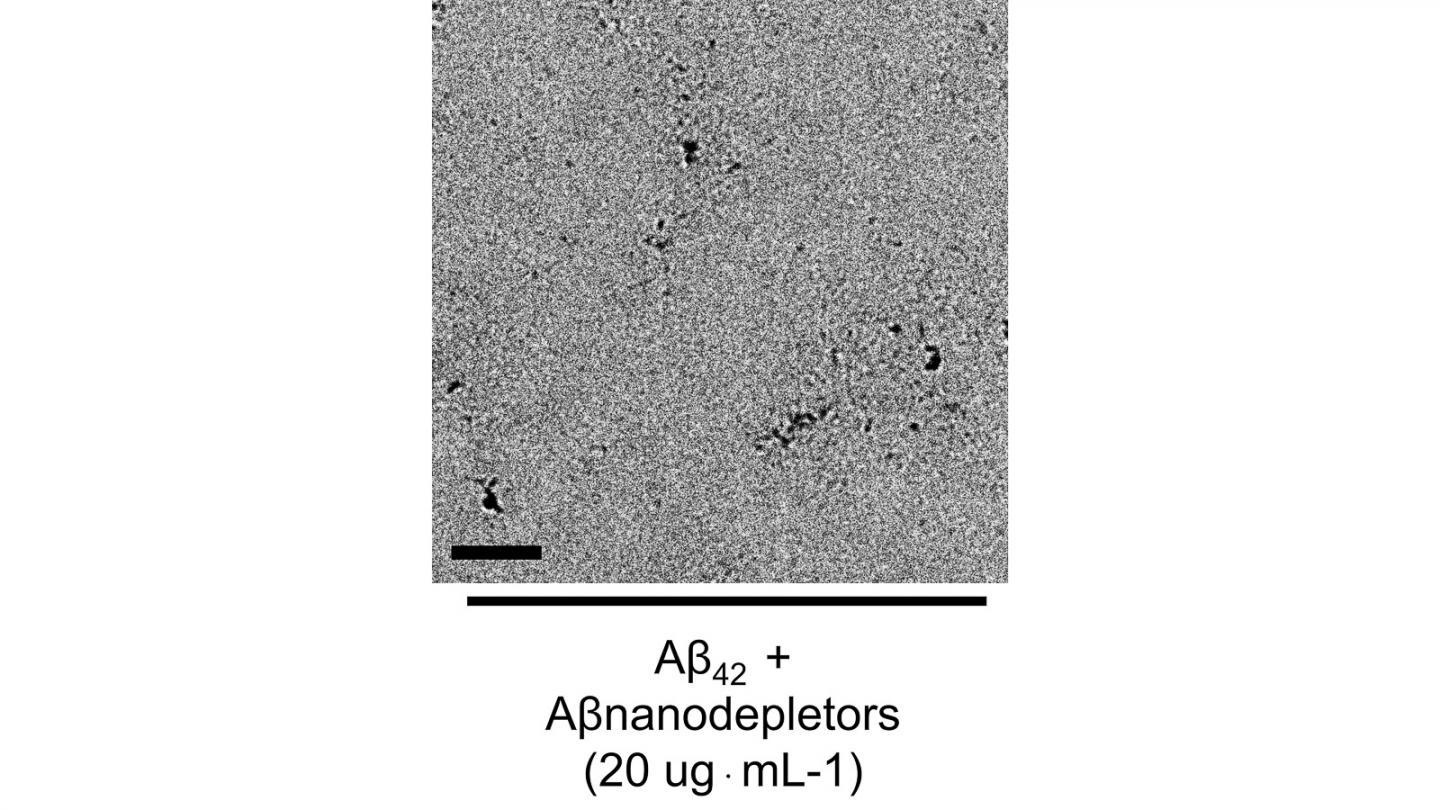 Transmission electron microscopy (TEM) images of Aβ peptide samples in the presence of the Aβ nanodevices (scale bar: 200 nm). The lack of grains in the image indicates the effectiveness of the nanodevice in trapping the peptides.
Argonne's Center for Nanoscale Materials

To find the optimal coating, the scientists first searched previous literature to identify antibodies that have high affinity to Aβ peptides. It was important to choose an antibody that attracts the peptides but doesn't bind to other molecules in the brain. Then the team, led by Wilton, produced the antibodies in bacteria and tested their performance.

A full antibody molecule can be up to a few dozen nanometers long, which is big in the realm of nanotechnology. However, only a fraction of this antibody is involved in attracting the peptides. To maximize the effectiveness and capacity of the nanodevices, Wilton's group produced tiny fragments of the antibodies to decorate the nanodevice's surface.

Engineering and testing the nanodevice

The scientists at CNM constructed the base of the porous, spherical nanodevices out of silica, a material that has long been used in biomedical applications due to its flexibility in synthesis and its nontoxicity in the body. Coated with the antibody fragments, the nanodevices capture and trap the Aβ peptides with high selectivity and strength.

"Many attempts to prevent Alzheimer's have focused on inhibiting enzymes from cutting β-amyloid peptides off of the cell's surface," said Rozhkova, who led the project at CNM. "Our elimination approach is more direct. We've taken building blocks from nanotechnology and biology to engineer a high-capacity 'cage' that traps the peptides and clears them from the brain."

At CNM, the scientists tested the effectiveness of the devices by comparing how the peptides behaved in the absence and presence of the nanodevices. Using in vitro transmission electron microscopy (TEM), they observed a notable decline in peptide aggregation in the presence of the nanodevices. They further analyzed the interactions using confocal laser scanning microscopy and microscale thermophoresis measurement, two additional techniques for characterizing interactions at the nanoscale. 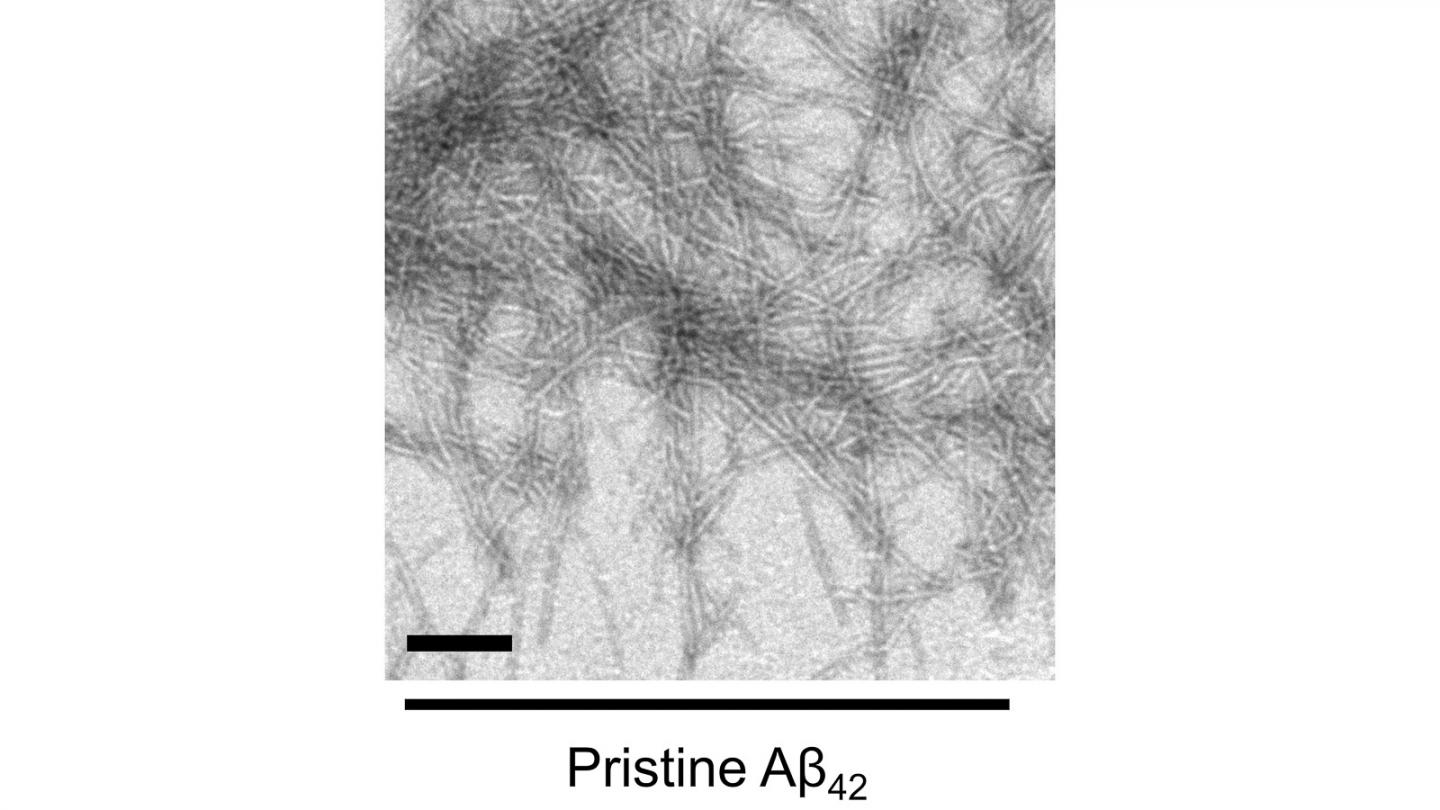 Transmission Electron Microscopy (TEM) images of Aβ peptide samples in the absence of the Aβ nanodevices (scale bar: 200 nm). The grains in the image are the peptides that, when left together, are prone to self-aggregation.
Argonne's Center for Nanoscale Materials

The scientists also performed small-angle X-ray scattering to study the processes that make the nanodevices porous during synthesis. The researchers performed the X-ray characterization, led by Byeongdu Lee, a group leader in Argonne's X-ray Science division, at beamline 12-ID-B of the lab's Advanced Photon Source (APS), a DOE Office of Science User Facility.

These studies supported the case that the nanodevices sequester the peptides from the pathway to aggregation by more than 90 percent compared to the control silica particles without the antibody fragments. However, the devices still needed to demonstrate their effectiveness and safety within cells and brains.

Joonseok Lee—who originally proposed this experiment at Argonne as a Director's Postdoctoral Appointee and pioneered the design for the nanodevice—continued the study of the therapeutic potential of this device at KIST and KAIST.

"The Director's Postdoctoral Position is a rare opportunity offered at Argonne that allows for unique research projects and cross-field collaborations that might not otherwise be possible," said Rozhkova. "We have incredible minds at the lab who want to explore topics that don't fall under a predefined area of research, and this program encourages this creativity and innovation."

The in vivo experiments—experiments that took place in living cells—performed by Lee and his collaborators showed that the nanodevices are nontoxic to cells. They also tested the effectiveness of the devices in the brains of mice with Alzheimer's, demonstrating around 30 percent suppression of plaque formation in brains containing the nanodevices compared to control brains.  The research on mice was conducted at KIST and KAIST in South Korea with appropriate government approvals.

This study combined the strengths of antibody engineering and nanotechnology, the power of two DOE User Facilities at Argonne and innovative collaboration resulting from the laboratory's postdoctoral program to explore a technological approach to preventing Alzheimer's.

Using a similar approach, scientists may also be able to pair the silica nanoparticles with different antibodies that target molecules related to other neurodegenerative diseases, such as Huntington's disease and Parkinson's disease, which also involve abnormal protein aggregation. The porous nanoparticles may be further upgraded for use in imaging applications including fluorescent imaging and magnetic resonance imaging.