Aug 22, 2017National Institute of Biomedical Imaging and Bioengineering
A team funded in part by the National Institute of Biomedical Imaging and Bioengineering (NIBIB) and led by University of Minnesota (UMN) researchers has developed a new method for thawing frozen tissue that may enable long-term storage and subsequent viability of tissues and organs for transplantation. The method, called nanowarming, prevents tissue damage during the rapid thawing process that would precede a transplant.

The team’s study in the March 1, 2017, issue of Science Translational Medicine, demonstrated how a bath of solution with evenly distributed and magnetized iron-oxide nanoparticles can be heated with electromagnetic waves to quickly and non-destructively thaw larger volumes of solution and tissue than had previously been rewarmed. With additional development, the researchers hope the method can be applied to revolutionize and dramatically improve organ storage for transplants. 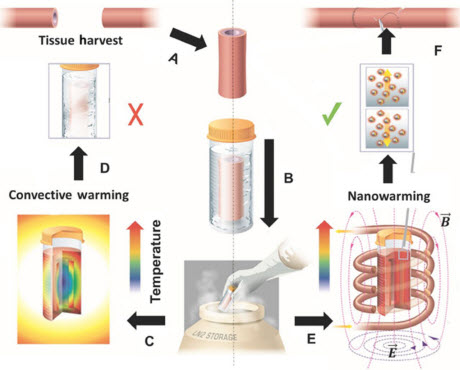 Schematic illustrating tissue vitrification, convective warming, and nanowarming. A Tissues are harvested from a donor. Representative harvest of a blood vessel is shown. B Tissues are loaded in a vial with cryopreservative and coated iron-oxide nanoparticles, then vitrified and stored at cryogenic temperatures. Warming by standard convection C leads to failure in larger 50 milliliter systems D. Nanowarming in an alternating magnetic field, an inductive RF coil that stimulates nanoparticle heating E, avoids warming failure and renders the tissue suitable for further testing or use F.Image credit: N Manuchehrabadi et al, Science Tranlational Medicine (2017).To make preserved-then-nanowarmed tissues usable, the iron-oxide first must be washed out of the sample. This key element in assuring tissue viability required a novel imaging technique to confirm elimination of nanoparticles. The research team included NIBIB-funded experts in biomedical imaging from the UMN’s Center for Magnetic Resonance Research, who adapted a non-invasive imaging technique, called SWIFT, to study samples following the rewarming process. SWIFT is based on magnetic resonance imaging (MRI).

In a conventional MRI, magnetized nanoparticles generate only a fleeting, non-uniform signal; with SWIFT technology, however, the nanoparticles produce bright spots. To preserve the fleeting signal, the SWIFT method records image data almost simultaneously with the transmission of its electromagnetic pulse.

“Depending on the brightness of the signal, you can quantify the concentration of nanoparticles,” said Shumin Wang, Ph.D., Director of the NIBIB program in Magnetic Resonance Imaging. “After you wash out the nanoparticles, you want to see if any residual particles are still in the tissue. If the concentration is under a certain threshold, you can use the tissue safely.”

The underlying goal of the technology is saving lives through transplants. In the United States, more than 100,000 patients are waiting for life-saving organ transplants, and many more could potentially benefit from transplanted organs or tissue. The short preservation time during which donors and recipients must be matched limits optimal screening and some transplantation. Long-term preservation methods would enable screening that could help transplant clinicians find optimal matches for donated organs that would reduce transplantation risks, such as organ rejection.

Freezing tissue, or cryopreservation, can currently be used for long-term storage only of small biomaterials samples. A method, called vitrification, cools the samples in solution to between -160 and -196 degrees Celsius so they are preserved in an ice-free, glass-like state. The larger the sample, however, the more prone it is to crystallization and fracture when rewarmed. To avoid this problem and to potentially store larger samples that could include heart vessels and transplantable portions of organs such as a kidney, liver, or lung, the researchers added iron oxide to the preservation solution. Further, the nanoparticles received silica coating, which had the effect of evenly dispersing them within the solution.

To rewarm samples without damaging tissue, the researchers used MRI equipment comprised of a copper coil that creates an alternating magnetic field in and around the sample. The electromagnetic waves created in the device had limited effect on tissue and cells but stimulated and heated the nanoparticles distributed throughout the sample. The heated nanoparticles, in turn, rewarmed the sample.

Researchers performed warming experiments with human skin cells, pig arteries, and pig heart-valve-flap tissues in volumes with solution up to 50 to 80 milliliters (about 10 to 16 teaspoons). They found that convection heat transfer, the gold-standard approach to rewarming smaller systems of about 1 milliliter, is not able to prevent crystallization or cracking damage in larger systems. Samples that they rewarmed in the coil system—where evenly distributed nanoparticles warmed tissue and cells in a fast and uniform way—successfully rewarmed without this damage. The nanowarming method can generate 100 degrees of heating per minute, which is significantly faster and more uniform than convection in the larger systems.

Photographs and CT images of three separate arteries in 1 milliliter vials demonstrating successful artery vitrification (left), failure due to cracking (middle), and failure due to crystallization (right).Image credit: N Manuchehrabadi et al, Science Tranlational Medicine (2017).
Successful nanowarming of cryopreserved tissues requires that high concentrations of iron-oxide nanoparticles are uploaded and evenly distributed in the tissues prior to cooling, and washed out completely after thawing,” said co-author Michael Garwood, PhD, professor of radiology, University of Minnesota. “Prior to the development of SWIFT, no imaging technique had been capable of quantifying high concentrations of iron-oxide nanoparticles in tissues non-invasively.”

The next steps for the cryopreservation research will be to perform more tests with different animal and human tissues. Meanwhile, Garwood’s team is also working on an application of its SWIFT imaging approach to provide magnetic resonance imaging that is portable. “The challenge is when using a small portable magnet, the magnetic field is not as uniform as that produced by the larger magnet used in conventional devices,” Wang said. “SWIFT technology has been applied to acquire an image from this less uniform field. This problem of scale is of similar complexity to imaging iron-oxide nanoparticles in rewarmed tissues.”

This cryopreservation study, particularly the contribution of SWIFT technology to the work, was funded in part by NIBIB (EB 015894)