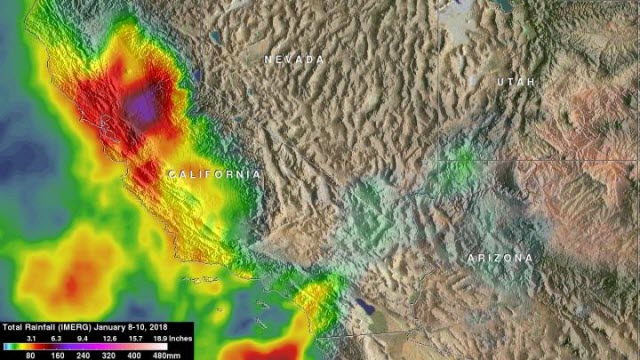 NASA's IMERG analysis of Jan. 8 through 10, 2018 revealed that the heaviest rainfall occurred over the Sacramento Valley where over 8 inches (203 mm) were indicated. A rainfall total of 5 inches (127 mm) was reported in Ventura County.Image credit: NASA/JAXA/Hal Pierce

Winter rains falling on recently burned ground triggered deadly mudslides in Santa Barbara County, California on January 9. NASA calculated the amount of rain fall between January 8 and 10, 2018 and calculated the potential for landslides.

At NASA's Goddard Space Flight Center in Greenbelt, Maryland, a landslide potential map was generated by the global Landslide Hazard Assessment for Situational Awareness (LHASA) model, a model that combines precipitation data from the Global Precipitation Measurement or GPM mission satellite with a global landslide susceptibility map. LHASA gives a broad overview of landslide hazard in nearly real time, but site-specific information should be obtained prior to emergency operations or building projects.

At least 17 residents of southern California have been killed by the deadly mudslides. A storm moving in from the Pacific Ocean dropped heavy rain over soil that was laid bare by last month's wild fires. Heavy rainfall loosened surface sediments in Santa Barbara County early Tuesday, Jan. 9 caused deadly mudslides. According to the California Department of Transportation parts of US 101, a major highway connecting northern and southern California has been closed because of mud and debris.

NASA's GPM or Global Precipitation Measurement mission satellite provides information on precipitation from its orbit in space. GPM is a joint mission between NASA and the Japan Aerospace Exploration Agency or JAXA. GPM also utilizes a constellation of other satellites to provide a global analysis of precipitation that are used in rainfall calculations.

At NASA Goddard, a rainfall analysis was constructed using NASA's Integrated Multi-satellitE Retrievals for GPM (IMERG) data. Precipitation data acquired from satellites in the GPM Constellation during the period from January 8 to 10, 2018 were used in creating a rainfall accumulation map. The analysis showed the heavy rainfall that occurred over California during the past three days.

The IMERG analysis revealed that the heaviest rainfall occurred over the Sacramento Valley where over 8 inches (203 mm) were indicated. Southern California had heavy rainfall but the effects of the drenching rain was magnified by the bare soil left by last month's wildfires. A rainfall total of 5 inches (127 mm) was reported in Ventura County.