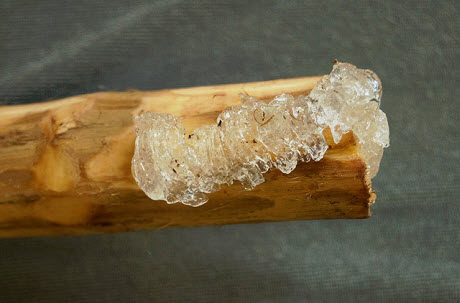 The sap oozing from this debarked frost grape stem has scientists intrigued by its similarity to gum Arabic, an imported emulsifying and thickening agent.Photo credit: Steven VaughnU.S. Department of Agriculture (USDA) researchers found a sap oozing from the stem of frost grape, a native U.S. grapevine, which has piqued their interest. This sap has an uncanny similarity to gum Arabic, a common thickening agent and emulsifier used in cake frosting, candies, paints, cosmetics and other products.

Gum Arabic is harvested commercially from wild acacia trees throughout the Sahara region of Africa, with more than 80 percent of commercial production centered in Sudan, according to Neil Price, a chemist with USDA's Agricultural Research Service (ARS) National Center for Agricultural Utilization Research (NCAUR) in Peoria, Illinois. Gum Arabic, which is typically sold in powdered form, can be hard to come by, adds Price.

Domestic equivalents of gum Arabic have proven elusive—until possibly now. In the August 2015 issue of the Journal of Agricultural and Food Chemistry, Price, together with plant physiologist Steven Vaughn and other NCAUR scientists, announced their discovery of the frost grape sap and its chemical and functional similarity to gum Arabic.

Frost grape, Vitis riparia, occurs throughout North America and typically grows as a woodland vine reaching up to 50 feet in length and measuring four to five inches in diameter. Shortly after cutting four-foot sections of the vine on his property in September 2014, Vaughn first observed the jelly-like sap.

Another colleague's use of nuclear magnetic resonance spectroscopy methods revealed the sap to be a "polysaccharide," a type of long-chain carbohydrate whose ratio of two primary sugars resembles that of gum Arabic.

In experiments, use of a water solution and grapefruit oil—a common beverage flavoring-and a one-percent or less concentration of the polysaccharide produced emulsions that remained stable past the study's 72-hour test period. The polysaccharide can also be made into a white powder, viscous liquid, or clear gel. Additionally, it lacks a protein allergen found in gum Arabic, reports Price in an article published in the December issue of AgResearch magazine.