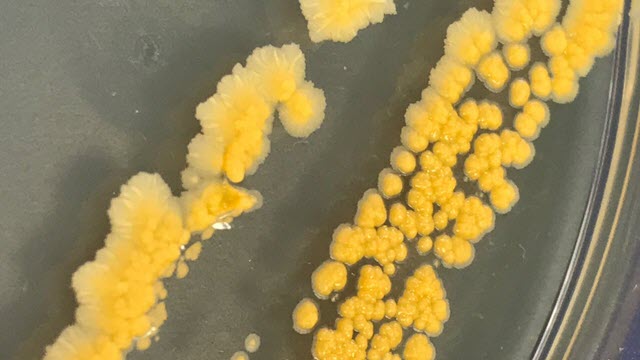 This is bacteria growing after being frozenCREDIT: University of Warwick

The survival mechanisms of polar fish have led scientists at the University of Warwick to develop of a revolutionary approach to "freeze" bacteria.

The new technique could radically improve the work to store and transport human tissue.

Researchers from the Department of Chemistry and Warwick Medical School have established a way to cryopreserve (or "freeze") a broad range of bacteria using synthetic reproductions of the natural antifreeze proteins found in polar organisms.

They found that adding the protein mimics slows ice crystal growth and stops them destroying the bacteria cells.

The revolutionary method has potential applications within the food industry, organ transportation, and medicine—as well as in laboratory research.

Bacteria are used in a vast range of processes including food technology (e.g. in yogurt and probiotics), pharmaceutical manufacturing (e.g. insulin) and enzyme production (e.g. for washing powders), and they are routinely used in research labs to study infection and the fundamentals of living processes.

The traditional approach to preserve bacteria used in nearly every laboratory worldwide is to add glycerol to the bacteria to reduce cold-induced damage during freezing. However, not all the bacteria recover after thawing and the glycerol needs to be removed from the bacteria to enable their growth and usefulness.

The Warwick team, led by professor Matthew I. Gibson, has developed a new method for cryopreservation, inspired by the process by which organisms known as extremophiles, survive in some of the coldest regions on Earth.

The group has a particular interest in polar fish species that produce antifreeze proteins. The research team has demonstrated that synthetic polymers that mimic the protein from these fish are effective in doing the same job.

By combining two polymers to slow ice growth during cryopreservation, the researchers were able to recover more bacteria after freezing than using conventional methods.

They also used less total additives, in some cases using just one percent of weight (compared to 20 percent typically used in traditional methods).

The team believes this will transform how micro-organisms are cryopreserved and will build on their previous research into storing human cells.

Gibson, from Warwick's Department of Chemistry and Warwick Medical School, said: "Bacteria underpin a vast amount of basic biosciences and health research, but their storage and transport is based on an old method.

"Our bio-inspired solutions, which we have also used for mammalian cell storage, provide a new platform to hopefully improve the availability and quality of bacteria, but with an easy-to-use approach which does not involve researchers or industries significantly adjusting their laboratory procedures."