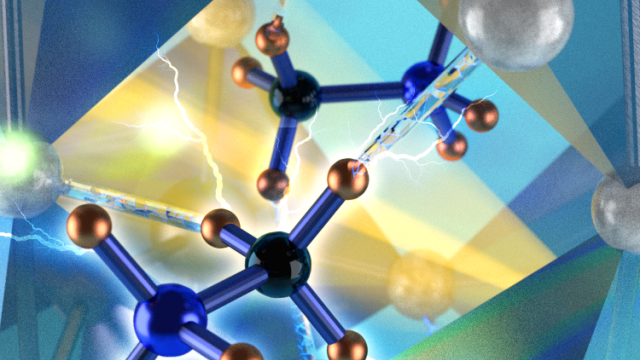 Neutron interactions revealed the orthorhombic structure of the hybrid perovskite stabilized by the strong hydrogen bonds between the nitrogen substituent of the methylammonium cations and the bromides on the corner-linked PbBr6 octahedra.Image credit: ORNL/Jill Hemman

OAK RIDGE, Tenn., April 23, 2018 – Neutron scattering has revealed, in real time, the fundamental mechanisms behind the conversion of sunlight into energy in hybrid perovskite materials. A better understanding of this behavior will enable manufacturers to design solar cells with increased efficiency.

The multi-institutional team of researchers from the Department of Energy’s Oak Ridge National Laboratory, Hunan University, and the University of Nebraska–Lincoln used photoluminescence measurements, along with neutron and x-ray scattering, to study the relationship between the material’s microscopic structure and its optoelectronic properties. By examining the material under varying degrees of temperature, the researchers were able to track atomic structural changes and establish how hydrogen bonding plays a key role in the material’s performance. Their results are published in the journal Advanced Materials.

Hybrid perovskites hold promise to be more efficient in converting light into energy than traditional solar cell materials. They are also easier to manufacture as they can be spin cast from solution and do not require high-vacuum chambers for synthesis.

Unlike their singular silicon or germanium counterparts, hybrid perovskites are made of both organic and inorganic molecules. The structure is built from inorganic lead and bromine molecules arranged in octahedral units that form cages around the organic methylammonium cations (positively charged ions) consisting of carbon, nitrogen, and hydrogen.

“The advantage of having both organic and inorganic molecules in a well-defined crystal structure means we can tailor the material by tuning either one group or the other to optimize the properties,” said Kai Xiao, a researcher at ORNL’s Center for Nanophase Materials Sciences. “But even though researchers have been studying these materials for several years, we still don’t fully understand on a fundamental level how the organic components are affecting the properties.”

Finding the right combination and molecular orientation of the organic/inorganic components is the key to unlocking more functionality, but understanding those interactions requires the right tools.

“Neutrons are very good at this because they’re sensitive to lighter elements like hydrogen,” said ORNL instrument scientist Xiaoping Wang. “Because we’re able to track each neutron, we get information about things like where the atoms are, what their temperature is, and how they’re behaving.”

Using the TOPAZ instrument at ORNL’s Spallation Neutron Source, the team was able to observe the hydrogen bonding interactions at the atomic scale.

The experiment revealed the material undergoes significant structural changes between approximately 150 and 130 Kelvin (roughly -190 and -225 degrees Fahrenheit). Cooling the material slowed the movement of the organic component into an ordered state, in which precise in situ measurements were made in real time to observe exactly how the organic molecules were binding to the lead-bromine component through hydrogen bonds.

“We saw the ordering is directly related to the hydrogen bonding in the structure, and how any changes can affect the energy gap of the material,” said Wang. “That lets us know how well sunlight is being absorbed and what that could mean in terms of applications for photovoltaic materials.”

Complementary photoluminescence and x-ray scattering measurements, along with crystal synthesis, were conducted at CNMS. Theoretical calculations were performed by scientists in ORNL’s Materials Science and Technology Division.

“Hybrid perovskites are already a good material,” said Xiao. “Now that we know how the orientation of the organic molecules impacts the crystal structure, and how we can tune them further to change the desired properties, this new fundamental understanding will enable us to design new materials with even greater potential.”