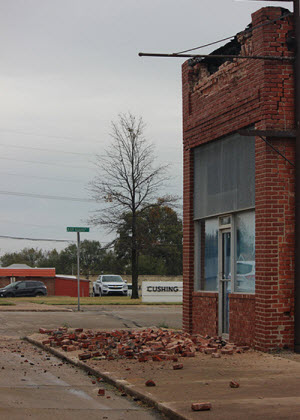 Damage to buildings in Cushing, Oklahoma, from the magnitude 5.0 earthquake on November 6, 2016. Unreinforced brick and stone masonry buildings and facades are vulnerable to strong shaking.Photo credit: Dolan Paris, USGSThe disposal of wastewater from oil and gas production by injecting it deep into the ground has been linked to a dramatic increase in earthquake activity in Oklahoma since 2009. Injection rates have declined recently because of regulatory actions and market forces, but seismologists say that has not yet significantly reduced the risk of potentially damaging earthquakes.

A new analysis led by seismologists at University of California Santa Cruz, published August 9 in Science Advances, found that the probability of moderate earthquakes this year in the affected areas of Oklahoma is two times higher than was suggested by an earlier analysis. The earlier study, published in November 2016, predicted that reduced wastewater injection would lead to substantially less seismic activity, with widely felt earthquakes of magnitude 3 or more decreasing significantly by the end of 2016 and approaching historic levels within a few years.

"Although they were correct in saying that small earthquakes seemed to be decreasing, the moderate earthquakes are not decreasing. The problem has not been resolved to where we can stop worrying about it," said coauthor Emily Brodsky, professor of Earth and planetary sciences at UC Santa Cruz.

As if to underscore the new findings, central Oklahoma experienced a series of earthquakes two weeks ago, including a magnitude 4.2 temblor on Aug. 2 that knocked out power in Edmond, near Oklahoma City. State seismologist Jacob Walter, a coauthor of the new paper, said it was the fourth earthquake of magnitude 4 or greater in 2017. The rate of such earthquakes is somewhat lower than in 2016, he said, but they continue to pose a hazard.

"There is still a significant seismic hazard in Oklahoma, and it's not going to taper off as fast as the earlier paper suggested," Walter said. 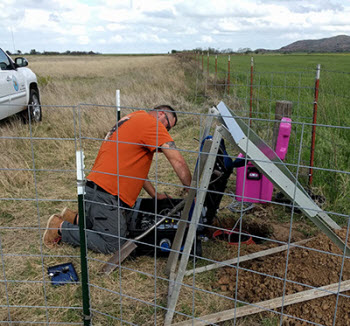 Isaac Woelfel of the Oklahoma Geological Survey installs a temporary seismometer near Quartz Mountain, OK. Scientists continue to evaluate the effects of reductions in wastewater injections on seismic activity in Oklahoma.Photo credit: Jacob Walter, OGSFirst author Thomas Goebel, a postdoctoral fellow at UC Santa Cruz, said his interest was piqued by some strong statements in the earlier paper, such as the prediction that seismicity would fall to historic levels within a few years, which he found puzzling. He noted that there were two large earthquakes in late 2016, the magnitude 5.8 Pawnee and magnitude 5.0 Cushing earthquakes, and these and other large earthquakes occurred when injection rates were relatively low.

Given the important implications regarding seismic hazards, Goebel and Brodsky decided to take a closer look at the original data and do their own analysis. For expertise on the seismic conditions in Oklahoma, they worked with Walter and a hydrogeologist with the Oklahoma Geological Survey, Kyle Murray.

The researchers used the same statistical model of injection-induced seismicity that was used in the earlier paper, but their analysis suggested a much higher probability of moderate earthquakes in 2017 (80 percent versus 37 percent). They also found no evidence suggesting that earthquake probabilities would be as low as historic values by 2025.