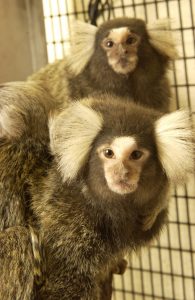 Marmoset monkeysPhoto courtesy of the Texas Biomedical Research InstituteSan Antonio, Texas (December 11, 2017) – An alternative animal model that mimics key features of the Zika virus infection, including its lingering presence in bodily fluids, has been developed at Texas Biomedical Research Institute in San Antonio. Acute infections in male marmosets, a New World monkey, resemble the human illness the Zika virus creates in people, including the presence of the virus in semen, saliva, and urine up to two weeks after the initial infection.

The research is featured in a December 7, 2017 article in the journal Scientific Reports.

The primary mode of transmission of the Zika virus is through mosquito bites. According to the Centers for Disease Control and Prevention, the disease can be spread through sexual contact.

Like 80 percent of humans infected with the Zika virus, most of the non-human primates used in this study lacked any apparent clinical symptoms.

“Given the key similarities to human infections, a marmoset model of Zika may be useful for testing of new drug and vaccines,” said Texas Biomedical Research Institute virologist Jean Patterson, PhD “Having an animal model of Zika infection to study may help us identify places where we might be able to block transmission.”

A year ago, Texas saw its first documented cases of the Zika virus transmitted by local mosquitoes. That handful of cases along the Texas-Mexico border likely won’t be the state’s last encounter with this emerging virus, according to public health reports.

Zika was first identified in Africa in the mid-20th century. It emerged as an infectious threat in the Western hemisphere in Brazil in 2015 where it made news for creating a spate of birth defects, including the devastating brain anomaly microcephaly.

While rhesus and cynomolgus macaque models of the Zika virus are being studied, the common marmoset (Callithrix jacchus) is a good model since they are small (about the size of a rat).

“That size can be an advantage when testing experimental vaccines and therapeutics that are available in limited quantities,” explained Suzette Tardif, PhD, the Associate Director of Research at the Southwest National Primate Research Center at Texas Biomed.

These monkeys have been shown to have a high susceptibility to infection by a variety of pathogens including Ebola virus and Lassa virus that affect humans, making marmosets useful for drug and vaccine testing.

Recently, Zika virus was discovered in serum and saliva from marmosets living in the wild in Brazil, suggesting that these non-human primates are “a potential reservoir for maintaining Zika virus in endemic countries,” according to Patterson’s report.

Scientists around the world are working to discover more about how the disease is transmitted from pregnant mother to the fetus, including scientists at Texas Biomed. The Institute works with the Brazilian, Puerto Rican and African strains of the Zika virus in its Biosafety Level 2 Laboratory.

“We don’t know where it (the Zika virus) will emerge, but we know more cases will show up in the United States,” Patterson emphasized. “It’s befuddling the epidemiologists.”

Zika research at Texas Biomed has been supported by numerous individual donations.

The marmosets used in this newly-published study are part of a colony of more than 2,500 non-human primates at the Southwest National Primate Research Center. SNPRC has a long-standing commitment to treating its animals humanely and with the highest regard for their well-being for the sake of the animals and the quality of our research programs.