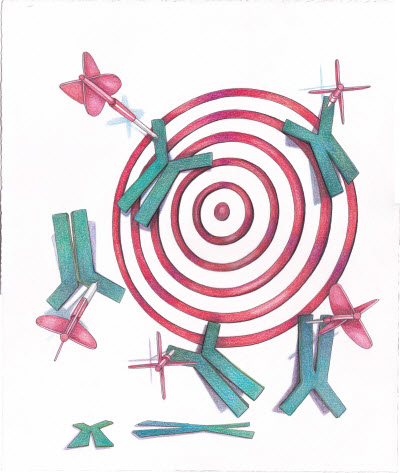 The new portal will help researchers find the right antibody to target their protein of interest.Illustration courtesy of Scott Rothbart, PhDCHAPEL HILL, NC – For years, a crisis has been brewing in molecular biology. The problem is that antibodies – research tools used to identify key proteins at work in a cell – aren’t always what they seem. Unreliable antibodies have led to numerous instances of false findings, failed experiments, and wasted money and samples.

Enter the Histone Antibody Specificity Database (www.histoneantibodies.com), a newly launched online portal that lets scientists find the right antibodies for their research with a much higher degree of confidence than ever before. Rather than relying on the claims of antibody manufacturers, the database is populated with validated test results, allowing researchers to access and compare real-world data and pick the most reliable antibody for each experiment.

A paper published today in the journal Molecular Cell describes the database and the science behind it.

“I can’t think of any field of biomedical research that doesn’t rely on antibodies; they’re typically the linchpin in many studies,” said Brian D. Strahl, PhD, professor of biochemistry and biophysics in the University of North Carolina School of Medicine and the study’s co-senior author. “But how reliable are these tools? There’s been a real awakening in the biological community that we need better ways to know if the antibodies are recognizing what they’re intended to recognize. That’s what we aim to accomplish with this portal.”

The web portal focuses on histone antibodies, a subset of antibodies that are central to the fast-growing field of epigenetics. Epigenetics researchers examine how layers of information outside the genome control the ‘on’ and ‘off’ state of genes, much like a light switch, that in turn affect all aspects of human health. Scientists use histone antibodies to track the roles of various proteins in this vital process of gene regulation.

“Epigenetic regulation of our genome is at the core of all aspects of biology, and basic research in this area is uncovering key mechanisms that contribute to human health and disease,” said Scott B. Rothbart, PhD, assistant professor in the Center for Epigenetics at Van Andel Research Institute (VARI) and co-corresponding author of the study. “Drugs targeting the epigenetic machinery are being tested in oncology clinics now, and a better understanding of what the antibodies are recognizing will help researchers define more precisely how epigenetics works and ultimately lead to better, stronger conclusions that can make a difference for drug discovery and future therapeutic interventions.”

Initially developed in the 1970s, laboratory-produced antibodies have been commercially available to scientists for decades. Since then, many researchers have simply ordered antibodies from among the hundreds of thousands on the market, taking their labels at face value. But a growing body of evidence has revealed that an alarming number of antibodies do not perform as advertised.

Each histone antibody is supposed to bind to a specific protein target, allowing scientists to track where and how that protein is being regulated in healthy and diseased cells. However, some antibodies have been observed binding to other proteins in addition to their primary target while other antibodies have been shown to bind to just one target, but not the target indicated on the product label. In some cases, an antibody’s accuracy and specificity vary from one lot to the next, suggesting quality-control issues in the manufacturing process.

All of these errors muddy–and in some cases, completely undermine–research results.

While some vendors have stepped up their testing and quality control efforts, others have not, and few researchers have the resources or time to do the battery of tests recommended to ensure their antibodies are performing as indicated.

The new database offers an easy way to access detailed information about the accuracy and specificity of more than 100 commonly used and commercially available histone antibodies. 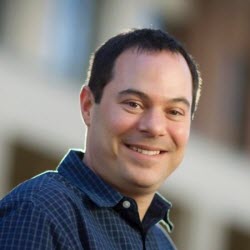 Brian Strahl, PhDPhoto courtesy of UNC School of MedicineThe testing method used to populate the database is based on custom-designed peptide microarrays that Strahl and his colleagues developed. The arrays present a library of all of the chemical modifications or “tags” known to occur on histone proteins. Analyzing antibodies that are developed to target these different tags on the arrays quickly illuminates the types of tags to which each antibody is capable of binding. This matters a lot. Each tag is thought to have a different function. For example, turning a gene ‘on’ or ‘off’.

Once word got out about the team’s peptide array platform, Strahl and his colleagues started fielding calls from other scientists asking for advice on antibody selection. Such interest from the scientific community sparked the team’s idea to buy all of the most common histone antibodies, test them on the array, and publish the results in an online portal accessible to everyone.

“We wanted it to be much more than a simple search-and-go database,” Strahl said. “Peptide arrays like the ones we developed are now available commercially, so any researcher, antibody manufacturer, or pharmaceutical company can run these tests. We built the portal so that people can easily upload their own results and the database can continue to grow.”

The portal allows users to search for antibodies using multiple parameters. A quality-control plan is in place to ensure the validity of user-submitted data.

“You don’t expect every antibody to be 100 percent perfect, but we think it’s important for researchers to be able to know what the flaws are,” Strahl said. “That way, at least people can interpret their results with the right amount of caution based on what the antibodies see–or don’t see.”