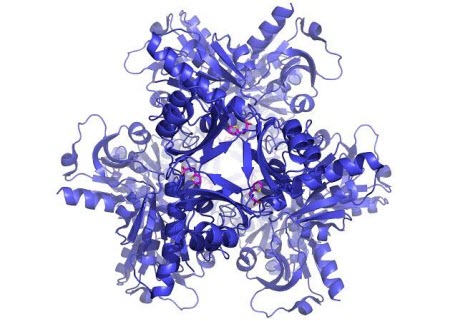 Ribbon representation of the structure of an enzyme known as ATP-PRT from TB bacteria (blue), bound to an allosteric activator (pink).Image credit: Luiz CarvalhoScientists have created a new way of screening compounds that is more sensitive than existing methods, opening up the possibility of finding new drugs for many diseases.

The researchers, from the Francis Crick Institute and University of Manchester, hope that their new technique will help to speed up drug development and find new uses for existing drugs and other compounds present in pharmaceutical libraries. Their findings are published in Nature Communications.

Discovering drugs from scratch is a lengthy and often unsuccessful process, so instead, pharmaceutical companies and academic laboratories carry out tests or 'screens' on thousands of existing compounds to see if any of them have an effect on a known target. Hits from these screens can be tested further to see if they could be used in the clinic.

Although incredibly useful for testing huge numbers of compounds against drug targets, traditional screening methods have a number of limitations. For instance, they are not very good at identifying compounds that only work when regulatory compounds are present. In the latest study the team developed a new way to screen for 'allosteric' compounds, which regulate the activity of enzymes.

Enzymes are large molecules that bind to smaller molecules, 'substrates', and convert them into useful products that cells need to survive. In cells and organisms, enzymes work within metabolic pathways, which are essential for the synthesis and decomposition of important metabolites and to generate energy.

However, these metabolic pathways need to supply exactly the right amount of products at a given time, so, sometimes, they need to be temporarily switched on or off depending on the amount of product that has been made. Allosteric compounds regulate enzyme activity by causing enzymes to bind to their substrates either more or less efficiently, or by slowing down or speeding up the rate of the reaction. Compounds that increase efficiency are known as allosteric activators, while those that reduce it are known as allosteric inhibitors.

When several allosteric compounds are present, they can either compete so that one has a dominant effect on enzyme activity or complement each other to create a larger effect. Traditional screening methods mix an individual compound with an enzyme and its substrates, so would not reveal effects that involve more than one allosteric compound. The new method, called CoSPI (compound screening in the presence of an inhibitor), involves screening enzymes and their substrates in the presence of a known allosteric inhibitor to see if any of the test compounds interacts with the inhibitor.

"Allosteric enzymes have important functions in all living things from bacteria to humans, and now we have an improved way of finding new drugs that could work by targeting them," says Luiz Carvalho, Group leader at the Francis Crick Institute.

To show the potential of CoSPI, the team took an enzyme present in tuberculosis (TB) bacteria that speeds up the first step in histidine synthesis- an amino acid essential for humans—and tested compounds on it in the presence of its substrates and a known allosteric inhibitor. They discovered an allosteric compound that successfully competes with the inhibitor, drastically increasing enzyme activity. Ultimately, compounds like this allosteric activator stop proper regulation of metabolic pathways, draining energy from bacteria until they die. Because humans don't have this enzyme—we get histidine from our diet—it is possible that these compounds could be used to kill TB bacteria without harming human cells, making it a possible new drug for TB and other types of bacterial infection.

"Our method allows us to find out early on how compounds interact to change enzyme activity," says Cesira de Chiara, researcher at the Francis Crick Institute. "We can find out more information in fewer experiments, which helps accelerate the drug discovery process."

The paper 'Uncoupling conformational states from activity in an allosteric enzyme' is published in Nature Communications.