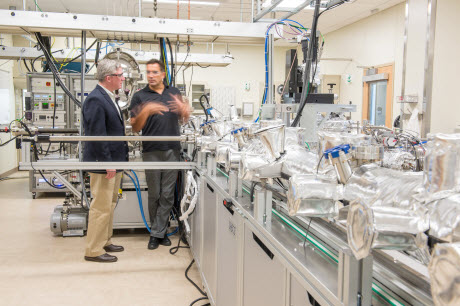 ACCESS Director Jeff Chamberlain and Argonne scientist and ACCESS R&D team member Vojislav Stamenkovic discuss an ultrahigh vacuum system, designed for synthesizing new electrode materials and characterizing their composition and structure for use in novel battery technologies, in the Electrochemistry Discovery Lab.Photo courtesy of Argonne National LaboratoryFew technologies hold more potential to positively transform our society than energy storage and nanotechnology. Advances in energy storage research will revolutionize the way the world generates and stores energy, democratizing the delivery of electricity. Grid-level storage can help reduce carbon emissions through the increased adoption of renewable energy and use of electric vehicles while helping bring electricity to developing parts of the world. Nanotechnology has already transformed the electronics industry and is bringing a new set of powerful tools and materials to developers who are changing everything from the way energy is generated, stored and transported to how medicines are delivered and the way chemicals are produced through novel catalytic nanomaterials.

Recognizing the power of these technologies and seeking to accelerate their impact, the U.S. Department of Energy's Argonne National Laboratory has created two new collaborative centers that provide an innovative pathway for business and industry to access Argonne's scientific resources to address the nation's energy and national security needs. These centers will help speed discoveries to market to ensure U.S. industry maintains a lead in this global technology race.

"This is an exciting time for us, because we believe this new approach to interacting with business can be a real game changer in two areas of research that are of great importance to Argonne and the world," said Argonne Director Peter B. Littlewood. "We recognize that delivering to market our breakthrough science in energy storage and nanotechnology can help ensure our work brings the maximum benefit to society."

NDW and ACCESS represent a new way to collaborate at Argonne, providing a single point of contact for businesses to assemble tailored interdisciplinary teams to address their most challenging R&D questions. The centers will also provide a pathway to Argonne's fundamental research that is poised for development into practical products. The chance to build on existing scientific discovery is a unique opportunity for businesses in the nano and energy storage fields.

The center directors, Andreas Roelofs of NDW and Jeff Chamberlain of ACCESS, have both created startups in their careers and understand the value that collaboration with a national laboratory can bring to a company trying to innovate in technologically challenging fields of science. While the new centers will work with all sizes of companies, a strong emphasis will be placed on helping small businesses and startups, which are drivers of job creation and receive a large portion of the risk capital in this country.

"For a startup like mine to have the ability to tap the resources of a place like Argonne would have been immensely helpful," said Roelofs. "We"ve seen the power of that sort of access, and we want to make it available to the companies that need it to drive truly transformative technologies to market."

Chamberlain said his experience as an energy storage researcher and entrepreneur led him to look for innovative approaches to leveraging the best aspects of private industry and public science. The national laboratory system has a long history of breakthrough science that has worked its way to market, but shortening that journey from basic research to product has become a growing point of emphasis for the national laboratories over the past couple of decades. The idea behind ACCESS and NDW is to make that collaboration even easier and more powerful.

"Where ACCESS and NDW will differ from the conventional approach is through creating an efficient way for a business to build a customized, multi-disciplinary team that can address anything from small technical questions to broad challenges that require massive resources," Chamberlain said. "That might mean assembling a team with chemists, physicists, computer scientists, materials engineers, imaging experts, or mechanical and electrical engineers; the list goes on and on. It's that ability to tap the full spectrum of cross-cutting expertise at Argonne that will really make the difference."

Chamberlain is deeply familiar with the potential of energy storage as a transformational technology, having led the formation of Argonne's Joint Center for Energy Storage Research (JCESR). The center's years-long quest to discover technologies beyond lithium-ion batteries has solidified the laboratory's reputation as one of the key global players in battery research. ACCESS will tap Argonne's full battery expertise, which extends well beyond JCESR and is dedicated to fulfilling the promise of energy storage.

Energy storage research has profound implications for energy security and national security. Chamberlain points out that approximately 1.3 billion people across the globe do not have access to electricity, with another billion having only sporadic access. Energy storage, coupled with renewable generation like solar, could solve that problem and eliminate the need to build out massive power grids. Batteries also have the potential to create a more secure, stable grid for countries with existing power systems and help fight global climate disruption through adoption of renewable energy and electric vehicles.

Nanotechnology is similarly poised to transform the world. Scientists have been working with materials at the nanoscale — generally described as less than 100 nanometers — for several decades and have made dramatic discoveries. Roelofs said that through quantum effects, materials can develop very different properties when created at nanoscale, essentially establishing a new dimension of materials that behave differently than those described in the periodic table of elements. Advancing technologies are giving scientists the tools to work in new ways at the nano scale, essentially enabling them to place individual atoms in a specific order to create materials with novel properties.

Argonne researchers are pursuing hundreds of projects in nanoscience, but some of the more notable include research into targeted drugs that affect only cancerous cells; magnetic nanofibers that can be used to create more powerful and efficient electric motors and generators; and highly efficient water filtration systems that can dramatically reduce the energy requirements for desalination or cleanup of oil spills. Other researchers are working with nanoparticles that create a super-lubricated state and other very-low friction coatings.

"When you think that 30 percent of a car engine's power is sacrificed to frictional loss, you start to get an idea of the potential of these technologies," Roelofs said. "But it's not just about the ideas already at Argonne that can be brought to market, it's also about the challenges for businesses that need Argonne-level resources. I"m convinced there are many startups out there working on transformational ideas that can greatly benefit from the help of a place Argonne to bring those ideas to fruition. That is what has me excited about ACCESS and NDW."