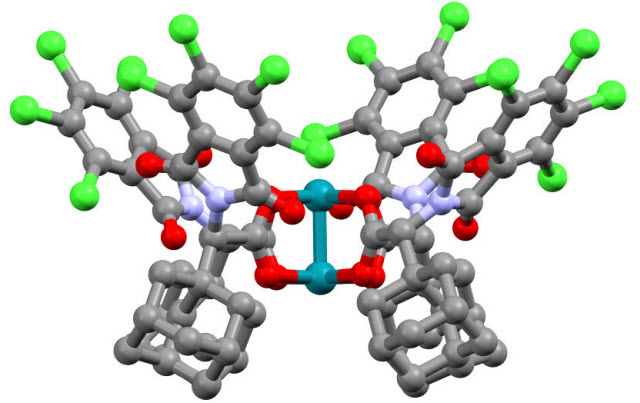 A side view of the new catalyst. The dirhodium, shown in blue, "is the engine that makes the catalyst work," says Emory chemist Huw Davies. "The shape of the scaffold around the dirhodium is what controls which C-H bond the catalyst works on."Graphic by Kuangbiao Liao

Chemists have developed another catalyst that can selectively activate a carbon-hydrogen bond, part of an ongoing strategy to revolutionize the field of organic synthesis and open up new chemical space.

The journal Nature is publishing the work by chemists at Emory University, following on their development of a similar catalyst last year. Both of the catalysts are able to selectively functionalize the unreactive carbon-hydrogen (C-H) bonds of an alkane without using a directing group, while also maintaining virtually full control of site selectivity and the three-dimensional shape of the molecules produced.

“Alkanes have a lot of C-H bonds and we showed last year that we can bring in one of our catalysts and pluck out a particular one of these bonds and make it reactive,” says Huw Davies, an Emory professor of organic chemistry whose lab led the research. “Now we are reporting a second catalyst that can do the same thing with another C-H bond. We’re building up the toolbox, and we’ve got more catalysts in the pipeline that will continue to expand the toolbox for this new way of doing chemistry.”

Selective C-H functionalization holds particular promise for the pharmaceutical industry, Davies adds. “It’s such a new strategy for making chemical compounds that it will opens up new chemical space and the possibility of making new classes of drugs that have never been made before.”

Alkanes are the simplest of molecules, consisting only of hydrogen and carbon atoms. They are cheap and plentiful. Until the recent development of the catalysts by the Davies lab, however, alkanes were considered non-functional, or unreactive, except in uncontrollable situations such as when they were burning.

Davies is the director of the National Science Foundation’s Center for Selective C-H Functionalization (CCHF), which is based at Emory and encompasses 15 major research universities from across the country, as well as industrial partners. The NSF recently awarded the CCHF renewed funding of $20 million over the next five years.

The CCHF is leading a paradigm shift in organic synthesis, which has traditionally focused on modifying reactive, or functional, groups in a molecule. C-H functionalization breaks this rule for how to make compounds: It bypasses the reactive groups and does synthesis at what would normally be considered inert carbon-hydrogen bonds, abundant in organic compounds.

“Twenty years ago, many chemists were calling the idea of selectively functionalizing C-H bonds outrageous and impossible,” Davies says. “Now, with all of the results coming out of the CCHF and other research groups across the world they’re saying, ‘That’s amazing!’ We’re beginning to see some real breakthroughs in this field.”

Many other approaches under development for C-H functionalization use a directing group—a chemical entity that combines to a catalyst and then directs the catalyst to a particular C-H bond. The Davies lab is developing a suite of dirhodium catalysts that bypass the need for a directing group to control the C-H functionalization. The dirhodium catalysts are encased within a three-dimensional scaffold.

“The dirhodium is the engine that makes the chemistry work,” Davies says. “The shape of the scaffold around the dirhodium is what controls which C-H bond the catalyst works on.”