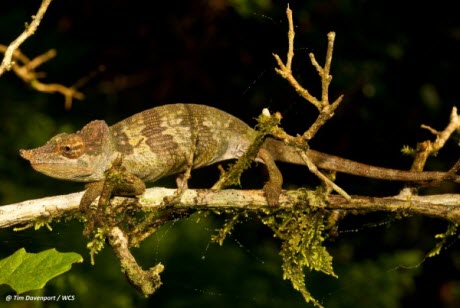 The brown and green chameleon with scattered blue spots was found in four montane forest patches in the Udzungwa Mountains and Southern Highlands. The species, Kinyongia msuyae, is named for Charles A. Msuya, a pioneer of Tanzanian herpetology who collected the first known specimen attributable to this species and has spent most of his life studying Tanzania’s reptiles and amphibians.

The chameleon is described in the journal Acta Herpetologica 10(2): 111-120, 2015. Authors of the study include: Michele Menegon of the Museo delle Scienze in Trento, Italy; Simon P. Loader of the University of Roehampton in London; Tim Davenport and Sophy Machaga of WCS; Kim M. Howell of the University of Dar es Salaam; Colin R. Tilbury of South African National Biodiversity Institute; and Krystal A. Tolley University of Stellenbosch in South Africa.

The authors say the discovery sheds more light on a region called the Makambako Gap, a supposed zoological barrier between the distinct faunas of the Southern Highlands and Eastern Arc Mountains that Davenport and WCS have long argued doesn’t exist. Evidence from this new species points to even closer biological affinities between the Udzungwa and the Livingstone Mountains of the Southern Highlands.

Tanzania’s Southern Highlands has emerged as a hotbed of new discoveries in recent years. In 2003, WCS discovered the kipunji–a species of primate that turned out to be an entirely new genus–a first for Africa since 1923. And in 2012, WCS found Matilda’s horned viper, a new variety of snake.

“Along with our discoveries of the Kipunji, Matilda's horned viper and other reptiles and frogs, this new chameleon really seals the deal as regards the boundary of the Eastern Arcs,” said Tim Davenport, Director of WCS’s Tanzania Program and co-discoverer of the new chameleon. “It is very clear now that the so-called Makambako Gap doesn't exist zoologically, and that the Southern Highlands is every bit as biodiverse and endemic-rich as all other Eastern Arc Mountains. With its own unique fauna and flora the region thus warrants as much protection as we can possibly afford it.”