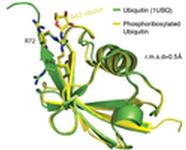 Superposed crystal structures of ubiquitin (green) and ubiquitin modified by the Legionella enzyme (yellow). Modified ubiquitin contains an additional phosphoribosyl group at amino acid position 42.Image Credit: CellThe attachment of ubiquitin was long considered as giving the "kiss of death", labelling superfluous proteins for disposal within a cell. However, by now it has been well established that ubiquitin fulfils numerous additional duties in cellular signal transduction. A team of scientists under the lead of Ivan Dikic, director of the Institute of Biochemistry II at Goethe University Frankfurt, has now discovered a novel mechanism of ubiquitination, by which Legionella bacteria can seize control over their host cells. Legionella causes deadly pneumonia in immunocompromised patients.

According to the current understanding, the coordinated action of three enzymes is needed for attaching ubiquitin to other proteins. In April this year, U.S. scientists described an ubiquitination reaction that depends only on a single enzyme from Legionella bacteria. The Dikic team together with the group of Ivan Matic (Max Planck Institute for Biology of Ageing, Cologne, Germany) now elucidated the underlying molecular mechanism of its action and revealed a hitherto unknown type of chemical linkage between ubiquitin and target proteins.

Their discovery breaks new ground in the field. Sagar Bhogaraju, researcher in the Dikic laboratory, comments: "Most exciting is of course the question if this unusual ubiquitination also occurs in human cells independently of bacterial infection and if there are similar, so far unknown enzymes in humans, which may have a profound influence on cellular processes."

When studying the new mechanism in more detail, the Frankfurt scientists were very surprised to find that the Legionella enzyme does not only transfer ubiquitin onto target proteins, but also chemically manipulates the remaining pool of ubiquitin molecules. Modified ubiquitin almost completely inhibits the conventional ubiquitination system, thereby revealing a new role for this enzyme during Legionella infections.

Several important cellular processes are affected by this shut-down of the ubiquitination system, which can also cause a rapid cell death. The Dikic team showed for example that modified ubiquitin prevents degradation of mitochondria (a process called mitophagy), affects transduction of inflammatory signals and constrains protein degradation.

"Most likely, Legionella is not the only bacterium using this mechanism. We hope that our results help to identify new strategies for the development of antibacterial agents, which could complement conventional antibiotics by limiting cellular damage induced by bacterial enzymes", explains Dikic the high medical relevance of their discovery.

The group of Ivan Dikic is located at both the Institute of Biochemistry II and the Buchmann Institute for Molecular Life Sciences at Goethe University Frankfurt and has previously contributed significantly to a paradigm change in the ubiquitin field. Ivan hypothesized early on that ubiquitin signals are recognized and translated by specialized domains in other proteins. He identified ubiquitin-binding domains in more than 200 ubiquitin receptors and was able to prove their role in diseases like cancer, amyotrophic lateral sclerosis and Parkinson's.