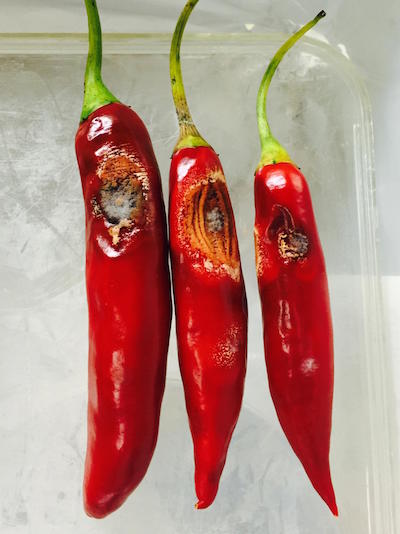 Black lesions were caused by anthracnose.University of MelbourneScientists have identified four new pathogens previously not found in Australian chillies, raising the stakes for the country's quarantine and disease resistance efforts.

The pathogens, all part of the Colletotrichum species, cause a fungal disease called anthracnose, which lowers yield and produces large, sunken black spots on a variety of fruits and vegetables.

While anthracnose already exists in Australia, the discovery of four new pathogens in chillies raises important new questions about how to better protect Australia's horticultural industry.

The pathogens have a broad host range, meaning they are able to infect other fruits and vegetables, but particularly tropical fruits such as papayas and mangoes.

Professor Paul Taylor, from the Faculty of Veterinary and Agricultural Sciences at the University of Melbourne, said the discovery highlights the need for an effective and efficient diagnostic quarantine system in Australia.

"Before this study, there were only two species of Colletotrichum thought to exist In chilli here," he said.

"The identification of four new ones suggests we need to keep a closer eye on the status of existing pathogens, otherwise our billion-dollar agriculture export industry is at risk."

Professor Taylor and his PhD student Ms Dilani de Silva, analyzed infected chilli fruits from southeast Asia and Queensland, which is the hub of production in Australia.

The state produces about 40,000 tonnes of chilli and capsicum over 1,722 hectares a year.

Using molecular techniques and classical taxonomy, the research team identified three Colletotrichum species not found before in Australian chillies (but previously in avocados and papayas) and another never before identified.

The new species is C. cairnsense, while the three new to chilli fruit are: C. siamense, C. simmondsii and C. queenslandicum.

At the moment, growers in Australia manage anthracnose with fungicides, but the identification of the new pathogens will contribute to efforts to build disease resistance in chilli plants.

"This disease is particularly hard to control because of the number of pathogens that make it up," Professor Taylor said.

"On the positive side, our analysis did not detect C. scovillei, which has caused major problems in southeast Asia and has spread heavily throughout Indonesia, Malaysia, Thailand, and Taiwan.

"With further research we can hopefully prevent the incursion of new exotic Colletotrichum species into Australia."

Professor Taylor would like to see more expansive surveying of chillies to allow for the identification of pathogens, as well as the development of tests that will make diagnoses even easier.

"Identification and monitoring of pathogens is the only way to mitigate chilli disease in Australia," he said.

"There is a real lack of tools available right now to industry and quarantine personal that we need to address."

The study has recently been published in the journal, Plant Pathology.