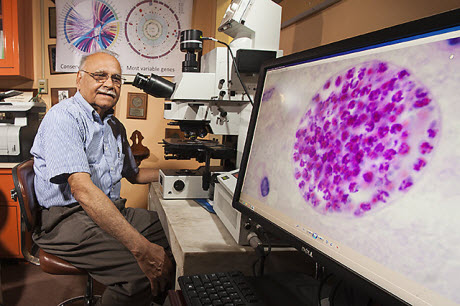 For the study, a consortium of international researchers, including Agricultural Research Service (ARS) zoologist Benjamin Rosenthal and parasitologist Jitender Dubey, contributed strains of T. gondii from more than a dozen countries spanning the Americas, Europe, Africa, and Asia. Both researchers are with the ARS Animal Parasitic Diseases Laboratory in Beltsville, Maryland.

The team conducted a genomic analysis on each of 62 strains and identified several types of proteins, called "secretory pathogenicity determinants" (SPDs), that thwart the hosts' immunity. Secreting SPDs enables the parasite to influence and hinder the host's defenses. These proteins enhance the parasite's survival and, as a result, induce more or less severe disease in hosts.

The findings are helping researchers to identify the genetic basis for differences among strains of T. gondii, from mild-mannered strains found in U.S. farmlands to more virulent strains found in the jungles of Brazil and French Guyana. The researchers found that T. gondii strains could become more aggressive through environmental adaptation.

The study results provide valuable information about a subset of regulatory genes that enable the parasite to infect animals and humans. The findings will help researchers develop new treatments and methods to check the parasite's ability to transmit.

The study appeared in the January 2016 issue of Nature Communications. Read more about this work in the August 2016 issue of AgResearch.