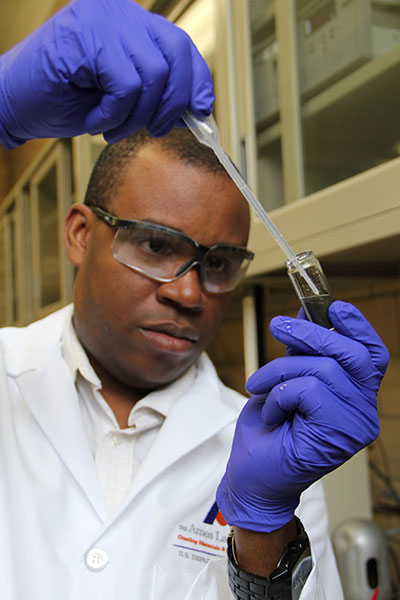 CMI scientist Ikenna Nlebedim.Photo courtesy of Ames LaboratoryThe process, which inexpensively processes and directly reuses samarium-cobalt waste powders as raw material, can be used to create polymer-bonded magnets that are comparable in performance to commercial bonded magnets made from new materials. It can also be used to make sintered magnets (formed by pressure compaction and heat).

Early on, the CMI research team’s goal was to find an efficient method of separating and recovering the rare-earth metals for reuse. But CMI scientist Ikenna Nlebedim said he and co-inventor Bill McCallum wanted to push further. “We decided to see if there is a possibility of reusing the swarf itself for magnet manufacturing,” he said. “We wanted to see if we could save that extra step of metals separation, because it’s not just an extra step, it’s an expensive and time consuming one.”

The initial results of the process produced magnets with a magnetic strength (maximum energy product) of approximately 11 MGOe (megagauss-oersteds), a property that the team believes they can improve by optimizing the process.

“If we can optimize the process, this magnet will fit very well in a performance gap that exists between the non-rare-earth magnets and rare-earth magnets,” Nlebedim said. The product may be a more cost-effective choice for some applications, reducing the need for more expensive neodymium-iron-boron magnets.

Nlebedim said the researchers continue to explore other possibilities for the technology as well, including the production of sintered samarium-cobalt magnets, a material with more economic value than bonded magnets. Nlebedim said the process also accomplishes its original goal of separating rare-earth metals, when necessary.

“I think the beauty of this process is that it has direct value to manufacturers of magnets,” said Nlebedim. “They recover their own swarf directly and recycle it themselves. Because it is not recovered from post-consumer products, manufacturers retain quality control of the composition of their materials and can be confident of the grade of their product. From a profit standpoint, this process is very strategically placed to benefit them.”