PITTSBURGH, PA — Today's virtual reality systems can create immersive visual experiences, but seldom do they enable users to feel anything—particularly walls, appliances, and furniture. A new device developed at Carnegie Mellon University (CMU), however, uses multiple strings attached to the hand and fingers to simulate the feel of obstacles and heavy objects.

By locking the strings when the user's hand is near a virtual wall, for instance, the device simulates the sense of touching the wall. Similarly, the string mechanism enables people to feel the contours of a virtual sculpture, sense resistance when they push on a piece of furniture or even give a high five to a virtual character.

Cathy Fang, who will graduate from CMU next month with a joint degree in mechanical engineering and human-computer interaction, said the shoulder-mounted device takes advantage of spring-loaded strings to reduce weight, consume less battery power and keep costs low.

"I think the experience creates surprises, such as when you interact with a railing and can wrap your fingers around it," Fang said. "It's also fun to explore the feel of irregular objects, such as a statue."

The team's research paper was named a best paper by the Conference on Human Factors in Computing Systems (CHI 2020), which was scheduled for this month but canceled due to the COVID-19 pandemic. The paper has now been published in the conference proceedings in the Association for Computing Machinery's Digital Library. 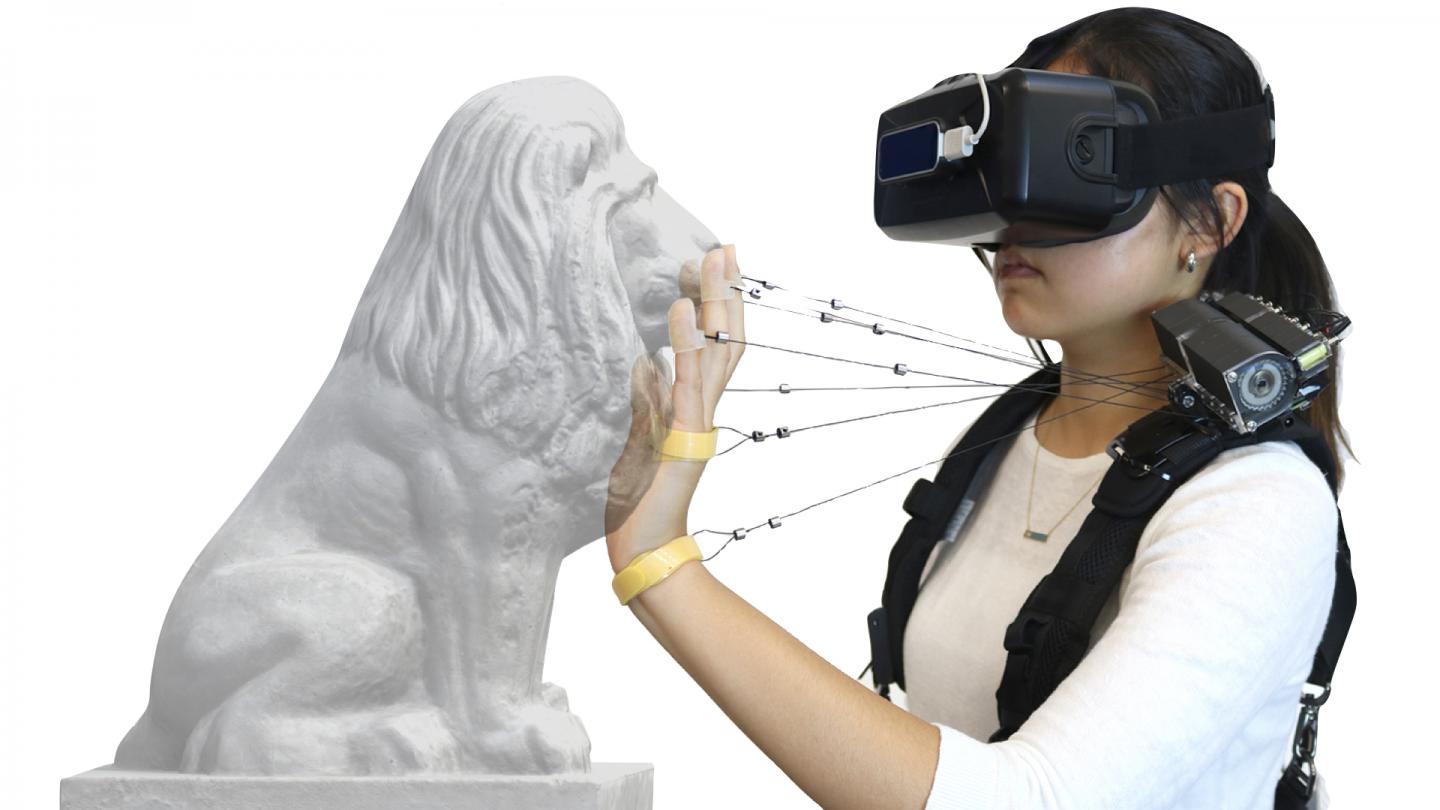 Other researchers have used strings to create haptic feedback in virtual worlds, but typically they use motors to control the strings. Motors wouldn't work for the CMU researchers, who envisioned a system both light enough to be worn by the user and affordable for consumers.

"The downside to motors is they consume a lot of power," Fang said. "They also are heavy."

Instead of motors, the team used spring-loaded retractors, similar to those seen in key chains or ID badges. They added a ratchet mechanism that can be rapidly locked with an electrically controlled latch. The springs, not motors, keep the strings taut. Only a small amount of electrical power is needed to engage the latch, so the system is energy efficient and can be operated on battery power.

The researchers experimented with a number of different strings and string placements, eventually concluding that attaching one string to each fingertip, one to the palm and one to the wrist provided the best experience. A Leap Motion sensor, which tracks hand and finger motions, is attached to the VR headset. When it senses that a user's hand is in proximity to a virtual wall or other obstacle, the ratchets are engaged in a sequence suited to those virtual objects. The latches disengage when the person withdraws their hand.

The entire device weighs less than 10 ounces. The researchers estimate that a mass-produced version would cost less than $50.

Fang said the system would be suitable for VR games and experiences that involve interacting with physical obstacles and objects, such a maze. It might also be used for visits to virtual museums. And, in a time when physically visiting retail stores is not always possible, "you might also use it to shop in a furniture store," she added.