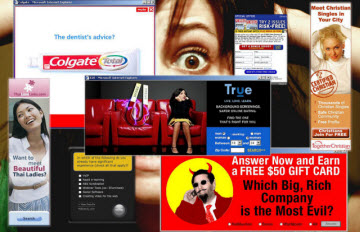 Image Credit: Piratechickan on FlickrScroll ads, a newer style of advertisement designed for mobile screens, show signs of being more effective than older forms of digital advertising, according to a new experimental study conducted by The Media Insight Project, a collaboration between the American Press Institute and The Associated Press-NORC Center for Public Affairs Research. This new research has significant implications for a news industry that is constantly searching for new revenue models to finance journalism.

"Banner and pop-up ads have been the standard way to advertise online for decades, though they have met consumer resistance, especially in mobile," said Tom Rosenstiel, executive director of the American Press Institute. "Our research into online advertisements finds that formats designed more recently, and with mobile in mind, strike users as less intrusive and more pleasing. To our surprise, compared with ad formats designed for other web environments, scroll ads can also improve recall of the product being advertised and enhance trust in the article where the ad appears."

These are some of the results of the online survey experiment conducted with 1,489 participants between November 9 and December 6, 2016, using AmeriSpeak, NORC's nationally representative survey panel. The online panel interface allows respondents to see and respond to content presented to them digitally, something that is not possible with traditional phone surveys.

Key findings of the experiment include:

"Scroll ads should play an even bigger role in online advertising because they appear to be more effective on a range of metrics than pop-up ads and static banners," said Trevor Tompson, director of The AP-NORC Center. "These ads optimized for mobile produce benefits to the advertiser and the news outlet compared to older styles of digital advertising."

The survey was conducted from November 9 through December 6, 2016. The survey was funded by the American Press Institute (API). Staff from API, NORC at the University of Chicago, and The Associated Press collaborated on all aspects of the study. Data were collected using the AmeriSpeak Panel, which is NORC's probability-based panel designed to be representative of the U.S. household population. During the initial recruitment phase of the panel, randomly selected U.S. households were sampled with a known, nonzero probability of selection from the NORC National Sample Frame and then contacted by U.S. mail, email, telephone, and field interviewers (face-to-face). Interviews for this survey were conducted with adults age 18 and over representing the 50 states and the District of Columbia. Panel members were randomly drawn from the AmeriSpeak Panel, and 1,489 completed the survey, all via the web. The final stage completion rate is 34.8 percent, the weighted household panel response rate is 32.4 percent, and the weighted household panel retention rate is 95.5 percent, for a cumulative response rate of 10.8 percent. The overall margin of sampling error is +/- 3.5 percentage points at the 95 percent confidence level, including the design effect. The margin of sampling error may be higher for subgroups.

A full description of the study methodology for the survey and the qualitative group interviews can be found at the end of the report.

The proper description of the survey's authorship is as follows: This study was conducted jointly by the American Press Institute and The Associated Press-NORC Center for Public Affairs Research.

About the Media Insight Project

The Media Insight Project is a collaboration between the American Press Institute and The AP-NORC Center for Public Affairs Research with the objective of conducting high-quality, innovative research meant to inform the news industry and the public about various important issues facing journalism and the news business. The Media Insight Project brings together the expertise of both organizations and their respective partners, and involves collaborations among key staff at the American Press Institute, NORC at the University of Chicago, and The Associated Press. http://www.mediainsight.org/

About the American Press Institute

Founded in 1946, the American Press Institute (API) conducts research, training, convenes thought leaders, and creates tools to help chart a path ahead for journalism in the 21st century. The American Press Institute is an educational non-advocacy 501(c)3 nonprofit organization affiliated with the Newspaper Association of America. It aims to help the news media, especially local publishers and newspaper media, advance in the digital age. http://www.pressinstitute.org

About The Associated Press-NORC Center for Public Affairs Research

The AP-NORC Center for Public Affairs Research taps into the power of social science research and the highest-quality journalism to bring key information to people across the nation and throughout the world. http://www.apnorc.org

The Associated Press (AP) is the essential global news network, delivering fast, unbiased news from every corner of the world to all media platforms and formats. Founded in 1846, AP today is the most trusted source of independent news and information. On any given day, more than half the world's population sees news from AP. http://www.ap.org

NORC at the University of Chicago is an objective and non-partisan research institution that delivers reliable data and rigorous analysis to guide critical programmatic, business, and policy decisions. Since 1941, NORC has conducted groundbreaking studies, created and applied innovative methods and tools, and advanced principles of scientific integrity and collaboration. Today, government, corporate, and nonprofit clients around the world partner with NORC to transform increasingly complex information into useful knowledge. http://www.norc.org

The two organizations have established The AP-NORC Center for Public Affairs Research to conduct, analyze, and distribute social science research in the public interest on newsworthy topics, and to use the power of journalism to tell the stories that research reveals.

The Voice of the American Laboratory Product and Supply Industry

The Voice of the American Laboratory Product and Supply Industry