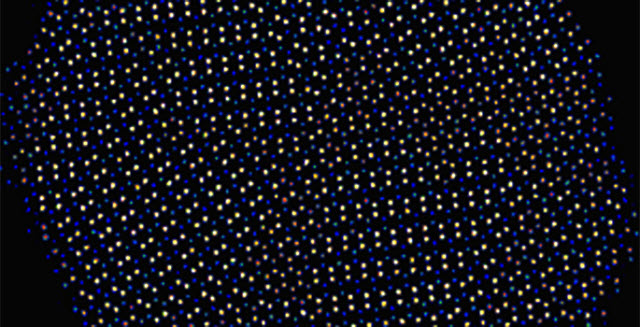 Scanning Transmission Electron Microscope image showing the interlaced crystalline structure.Wu Zhou/ORNLWriting in the Nov. 14 issue of the journal Nature Communications, the researchers describe finding this unusual arrangement of atoms while studying nanoparticles made from the semiconductor copper-indium sulfide (CIS), which is being actively studied for use in solar cells. The interlaced crystal arrangement has properties that make it ideal for thermoelectric applications that turn heat into electricity, they report. The discovery of materials with improved thermoelectric efficiency could increase the efficiency of electrical power generation, improve automobile mileage and reduce the cost of air conditioning. 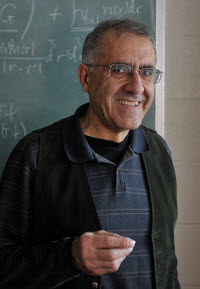 Sokrates Pantelides helped coordinate the research efforts at Vanderbilt and ORNL.Vanderbilt“We discovered this new form while studying nanoparticles,” said Sokrates Pantelides, University Distinguished Professor of Physics and Engineering at Vanderbilt, who coordinated the study. “It most likely exists in thin films or bulk samples, but it has apparently gone unnoticed.”

In crystalline materials, atoms are arranged in periodic arrays of points, a mathematical abstraction called a Bravais lattice. There are 14 different types of Bravais lattices in three dimensions. The same atom or group of atoms sits at each lattice point. The simplest and most symmetric is the “simple cubic” lattice. Square floor tiles provide a two-dimensional example. The corners of the tiles create a regular, repeating lattice pattern. A three-dimensional version is the face centered cubic (FCC), which has points both on the corners and at the centers of the faces of a cube. 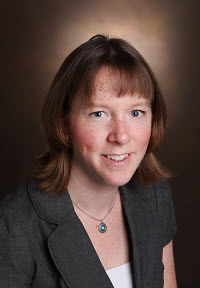 Janet Macdonald and a graduate student synthesized the nanoparticles that revealed the new form of crystalline order.VanderbiltBulk CIS generally has a cubic structure. But, when Vanderbilt Assistant Professor of Chemistry Janet Macdonald and her post-doctoral student Emil Hernandez-Pagan grew nanocrystals of CIS to explore their properties for solar light harvesting, they found that the tiny crystals had a hexagonal lattice structure, with the sulfur atoms occupying one sub-lattice and the copper and indium atoms sharing another.

“In CIS, the sulfur atoms make these perfectly packed layers and the copper and Indium ions lie in between, like jam in a sandwich. Emil was making nanoparticles of this material in the lab, but we didn’t know if the copper and indium were ordered or just randomly distributed in the ‘jam’ layers,” said Macdonald. “This was important because disordered structures generally have poor electrical properties.”

Because of the small size of nanoparticles, X-ray diffraction, the normal method for determining crystal structure, could not tell whether the copper and indium atoms were ordered in some fashion. 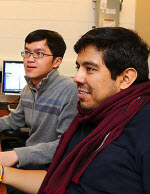 ORNL Wigner Fellow Wu Zhou, left, and microscopist Juan-Carlos Idrobo made the detailed atomic-level images that revealed the existence of the interlaced crystalline form.ORNLThe scientists didn’t have a clear idea about how these different ordered structures could coexist until Wigner Fellow Wu Zhou at ORNL successfully obtained detailed atomic-scale images of the nanoparticles. His images clearly showed that, while all atoms occupy the points of a perfect hexagonal Bravais lattice, the copper and indium atoms form a series of distinct domains where the copper and indium atoms are arranged differently. The boundaries between distinct copper-indium arrangements are similar to grain boundaries in polycrystalline solids, but both Shen’s calculations and the images revealed that the underlying hexagonal lattice is totally undisturbed.

When the researchers analyzed the images even more closely, “then things got even more interesting,” Macdonald said. “We discovered it was really hard to decide exactly where the edges were between the areas of different ordering. Usually it is really clear because normally when you have polycrystalline samples, there is strain at the edges between the different areas. So it was very strange that there seemed to be no strain or breaks at the edges. The underlying lattice was completely unperturbed by these different regions of copper/indium ordering. It was really quite amazing that despite all these little crystallites, the whole crystal lattice is completely happy and doesn’t need to shift or twist or break to accommodate them.”

Three atomic-resolution images of a copper-indium-sulfur nanoparticle: (a) Only the copper and indium atoms are shown in blue and yellow; (b) Copper and indium atoms shown in same color demonstrating that they form a perfect hexagonal lattice; (c) Same as (a) with the boundaries between regions of distinct copper-indium order outlined.Xiao Shen / VanderbiltAccording to the researchers, the interlaced crystal structure may be just what is needed to optimize thermoelectric applications for power generation or cooling. Thermoelectric devices need a material that is an excellent electrical conductor and a poor conductor of heat. The problem is that materials like metals that are good electrical conductors also tend to be good heat conductors and vice versa. Defects and grain boundaries that retard heat flow also reduce electrical conductivity. 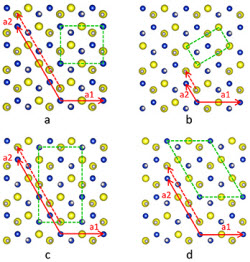 Illustration that shows the different atomic patterns in the domains outlined in image (c) above.Xiao Shen / VanderbiltIn addition to CuInS2, there is a large class of materials that should have similar interlaced structures. When made into thin films, they should be excellent thermoelectric materials, the researchers predict.

“We haven’t tested this yet, but we are confident that these materials have high electrical conductivity and low thermal conductivity…just what you need for thermoelectrics. The field is now wide open for scientists who can fabricate thin films and make thermoelectric measurements,” said Pantelides.

Vanderbilt Research Assistant Professor Yevgeniy Puzyrev, ORNL microscopist Juan-Carlos Idrobo, and Stephen Pennycook at the University of Tennessee-Knoxville also contributed to the research, which was funded by National Science Foundation grants DMR-0938330, EPS-1004083 and CHE-1253105 and U.S. Department of Energy grant DE-FG02-0946554 and Office of Science contract DE-AC02-05CH11231 and by ORNL’s Basic Energy Sciences/Materials Science and Engineering Directorate and Center for Nanophase Materials Sciences, sponsored by US DOE.