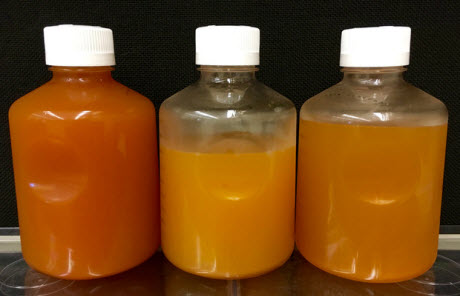 Ohio State University researchers and their colleagues have identified a new genus of bacteria living inside hydraulic fracturing wells. These jars contain samples of "produced water fluids"—the fluid that is collected at the surface of a hydraulic fracturing well after fracturing—from wells in Marcellus and Utica shale formations. The fluids are orange because they contain large amounts of iron that oxidizes when the fluids are brought to the surface. By analyzing the genomes of microbes in the water, the researchers are piecing together the existence of microbial communities inside the wells.Photo credit: Rebecca Daly, courtesy of The Ohio State UniversityCOLUMBUS, Ohio—Researchers analyzing the genomes of microorganisms living in shale oil and gas wells have found evidence of sustainable ecosystems taking hold there—populated in part by a never-before-seen genus of bacteria they have dubbed “Frackibacter.”

The new genus is one of the 31 microbial members found living inside two separate fracturing wells, Ohio State University researchers and their colleagues report in the Sept. 5 online edition of the journal Nature Microbiology.

Even though the wells were hundreds of miles apart and drilled in different kinds of shale formations, the microbial communities inside them were nearly identical, the researchers discovered.

Almost all the microbes they found had been seen elsewhere before, and many likely came from the surface ponds that energy companies draw on to fill the wells. But that’s not the case with the newly identified Candidatus Frackibacter, which may be unique to hydraulic fracturing sites, said Kelly Wrighton, assistant professor of microbiology and biophysics at Ohio State. 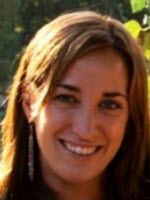 Kelly WrightonPhoto courtesy of Ohio State UniversityIn biological nomenclature, “Candidatus” indicates that a new organism is being studied for the first time using a genomic approach, not an isolated organism in a lab culture. The researchers chose to name the genus “Frackibacter” as a play on the word “fracking,” shorthand for “hydraulic fracturing.”

Candidatus Frackibacter prospered alongside the microbes that came from the surface, forming communities in both wells which so far have lasted for nearly a year.

“We think that the microbes in each well may form a self-sustaining ecosystem where they provide their own food sources,” Wrighton explained. “Drilling the well and pumping in fracturing fluid creates the ecosystem, but the microbes adapt to their new environment in a way to sustain the system over long periods.”

By sampling fluids taken from the two wells over 328 days, the researchers reconstructed the genomes of bacteria and archaea living in the shale. To the researchers’ surprise, both wells—one drilled in Utica shale and the other drilled in Marcellus shale—developed nearly identical microbial communities.

In addition, the two wells are each owned by different energy companies that utilized different fracturing techniques. The two types of shale exist more than a mile and a half below ground, were formed millions of years apart, and contained different forms of fossil fuel. Yet one bacterium, Halanaerobium, emerged to dominate communities in both wells.

“We thought we might get some of the same types of bacteria, but the level of similarity was so high it was striking. That suggests that whatever’s happening in these ecosystems is more influenced by the fracturing than the inherent differences in the shale,” Wrighton said.

Wrighton and her team are still not 100 percent sure of the microbes’ origins. Some almost undoubtedly came from the ponds that provide water to the wells, she said. But other bacteria and archaea could have been living in the rock before drilling began, Candidatus Frackibacter among them. 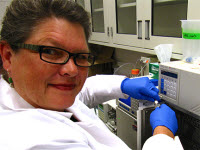 Rebecca DalyPhoto courtesy of Ohio State UniversityShale energy companies typically formulate their own proprietary recipes for the fluid they pump into wells to break up the rock and release oil or gas, explained Rebecca Daly, research associate in microbiology at Ohio State and lead author of the Nature Microbiology paper. They all start with water and add other chemicals. Once the fluid is inside a well, salt within the shale leaches into it, making it briny.

The microorganisms living in the shale must tolerate high temperature, pressure and salinity, but this study suggests that salinity is likely the most important stressor on the microbes’ survival. Salinity forces the microbes to synthesize organic compounds called osmoprotectants to keep themselves from bursting. When the cells die, the osmoprotectants are released into the water, where other microbes can use them for protection themselves or eat them as food. In that way, salinity forced the microbes to generate a sustainable food source.

In addition to the physical constraints in the environment, the microbes also must protect themselves from viruses. The researchers reconstructed the genomes of viruses living inside the wells, and found genetic evidence that some bacteria were indeed falling prey to viruses, dying, and releasing osmoprotectants into the water.

By examining the genomes of the different microbes, the researchers found that the osmoprotectants were being eaten by Halanaerobium and Candidatus Frackibacter. In turn, these bacteria provided food for other microbes called methanogens, which ultimately produced methane.

To validate their findings from the field, the researchers grew the same microbes in the lab under similar conditions. The lab-grown microbes also produced osmoprotectants that were converted into methane—a confirmation that the researchers are on the right track to understanding what’s happening inside the wells.

One implication of the study is that methane produced by microbes living in shale wells could possibly supplement the wells’ energy output.

Wrighton and Daly described the amount of methane produced by the microbes as likely minuscule compared to the amount of oil and gas harvested from the shale even a year after initial fracturing. But, they point out, there is a precedent in a related industry, that of coal-bed methane, to use microbes to greater advantage.

“In coal-bed systems they’ve shown that they can facilitate microbial life and increase methane yields,” Wrighton said. “As the system shifts over time to being less productive, the contribution of biogenic methane could become significantly higher in shale wells. We haven’t gotten to that point yet, but it’s a possibility.”

In the meantime, research led by co-author Michael Wilkins, assistant professor of earth sciences and microbiology, has used genomics information to grow Candidatus Frackibacter in the lab and is further testing its ability to handle high pressure and salinity.

This work is funded by the National Science Foundation’s Dimensions of Biodiversity program, the Department of Energy and the Deep Carbon Observatory.

Among the study’s co-authors from Ohio State is Paula Mouser, principal investigator on the Dimensions of Biodiversity grant. Other co-principal investigators and co-authors include Wrighton, Wilkins and David Cole, professor of earth sciences and Ohio Research Scholar. Co-author David Hoyt of the Environmental Molecular Sciences Laboratory at the Pacific Northwest National Laboratory analyzed the compounds in the fluids that provided evidence of microbial metabolism.