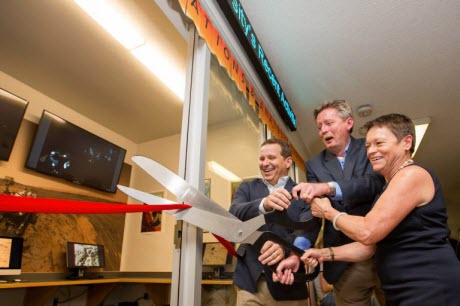 Edwards, along with his students and postdocs, will use this facility to collaborate with scientists from throughout the country, as well as engineers and rover operators at NASA’s Jet Propulsion Laboratory (JPL), to help develop the scientific plan for activities the rover will carry out on the Red Planet on any given day.

“We’re excited to have this wonderful new facility on NAU’s campus run by Dr. Edwards,” president Rita Cheng said at the opening celebration for the lab April 18. “This facility places NAU as one of a handful of prestigious institutions throughout the country actively contributing to NASA solar system exploration missions, and we’re proud to add this to NAU’s research portfolio.”

Edwards, a planetary geologist using orbiter and lander data to understand the past environments of Mars, joined NAU in 2016. He’s been planning the new lab even before he arrived on campus.

“This facility enables my students and postdocs to not only investigate pressing science questions related to Mars and other solar system bodies but to interact with MSL team members across the country and rover planners at JPL on a daily basis,” Edwards said

“I would like to thank President Cheng, Dean Paul Jagodzinski, Provost Dan Kain and Vice President for Research Bill Grabe for their support in making both this facility and our new PhD program in astronomy and planetary science a reality,” said Stephen Tegler, chair of the Department of Physics and Astronomy.

“I’m happy to lead this mission operations center at NAU and I’m actively working to make sure we have additional opportunities to conduct mission operations from this facility,” added Edwards, who is a participating scientist on MSL.