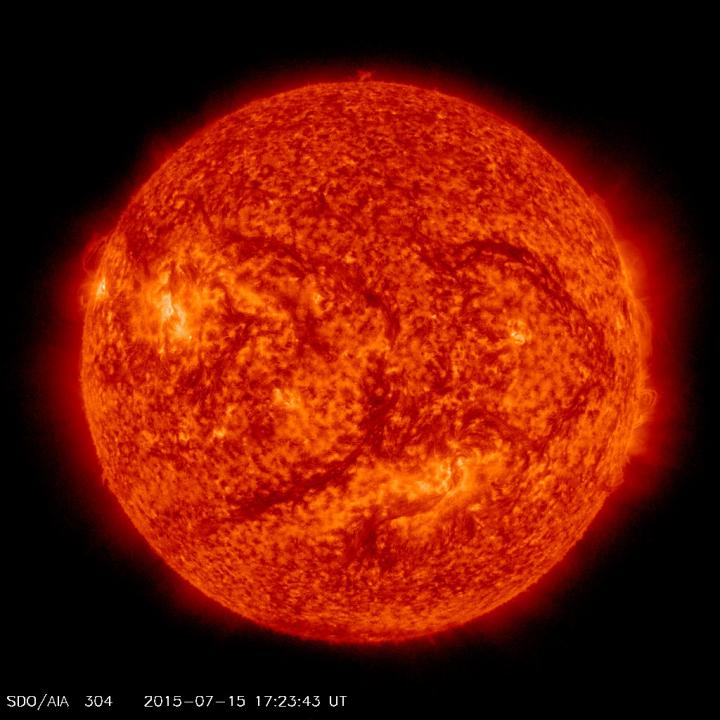 This image of the sun was taken by NASA Solar Dynamics Observations mission on July 15, 2015, at a wavelength of 304 Angstroms.NASA Solar Dynamics ObservationsThe arrival of intense cold similar to the one raged during the "Little Ice Age", which froze the world during the XVII century and in the beginning of the XVIII century, is expected in the years 2030--2040. These conclusions were presented by Prof. V.Zharkova (Northumbria University) during the National Astronomy Meeting in Llandudno in Wales by the international group of scientists, which also includes Dr Helen Popova of the Skobeltsyn Institute of Nuclear Physics and of the Faculty of Physics of the Lomonosov Moscow State University, professor Simon Shepherd of Bradford University (UK) and Dr Sergei Zharkov of Hull University (UK).

It is known, that the Sun has its own magnetic field, the amplitude and spatial configuration of which vary with time. The formation and decay of strong magnetic fields in the solar atmosphere results in the changes of electromagnetic radiation from the Sun, of the intensity of plasma flows coming from the Sun, and the number of sunspots on the Sun's surface. The study of changes in the number of sunspots on the Sun's surface has a cyclic structure vary in every 11 years that is also imposed on the Earth environment as the analysis of carbon-14, beryllium-10 and other isotopes in glaciers and in the trees showed.

There are several cycles with different periods and properties, while the 11-year cycle, the 90-year cycle are the best known of them. The 11-year cycle appears as a cyclical reduction in stains on the surface of the Sun every 11 years. Its 90-year variation is associated with periodic reduction in the number of spots in the 11-year cycle in the 50-25%. In 17th century though there was a prolonged of the solar activity called the Maunder minimum, which lasted roughly from 1645 to 1700. During this period, there were only about 50 sunspots instead of the usual 40-50 thousand sunspots. Analysis of solar radiation showed that its maxima and minima almost coincide with the maxima and minima in the number of spots.

In the current study published in 3 peer-reviewed papers the researchers analyzed a total background magnetic field from full disk magnetograms for three cycles of solar activity (21-23) by applying the so-called "principal component analysis", which allows to reduce the data dimensionality and noise and to identify waves with the largest contribution to the observational data. This method can be compared with the decomposition of white light on the rainbow prism detecting the waves of different frequencies. As a result, the researchers developed a new method of analysis, which helped to uncover, that the magnetic waves in the Sun are generated in pairs, with the main pair covering 40% of variance of the data (Zharkova et al, 2012, MNRAS). The principal component pair is responsible for the variations of a dipole field of the Sun, which is changing its polarity from pole to pole during 11 year solar activity.

The magnetic waves travel from the opposite hemisphere to the Northern hemisphere (odd cycles) or to Southern hemisphere (even cycles), with the phase shift between the waves increasing with a cycle number. The waves interacts with each other in the hemisphere where they have maximum (Northern for odd cycles and Southern for even ones). These two components are assumed to originate in two different layers in the solar interior (inner and outer) with close, but not equal, frequencies and a variable phase shift (Popova et al, 2013, AnnGeo).

The scientists managed to derive the analytical formula, describing the evolution of these two waves and calculated the summary curve which was linked to the variations of sunspot numbers, the original proxy of solar activity, if one used the modulus of the summary curve (Shepherd et al, 2014, ApJ). By using this formula the scientists made first the prediction of magnetic activity in the cycle 24, which gave 97% accuracy in comparison with the principal components derived from the observations.

Inspired by this success, the authors extended the prediction of these two magnetic waves to the next two cycle 25 and 26 and discovered that the waves become fully separated into the opposite hemispheres in cycle 26 and thus have little chance of interacting and producing sunspot numbers. This will lead to a sharp decline in solar activity in years 2030 - 2040 comparable with the conditions existed previously during the Maunder minimum in the XVII century when there were only about 50-70 sunspots observed instead of the usual 40-50 thousand expected.

The new reduction of the solar activity will lead to reduction of the solar irradiance by 3W/m^2 according to Lean (1997). This resulted in significant cooling of Earth and very severe winters and cold summers. "Several studies have shown that the Maunder Minimum coincided with the coldest phase of global cooling, which was called "the Little Ice Age". During this period there were very cold winters in Europe and North America. In the days of the Maunder minimum the water in the river Thames and the Danube River froze, the Moscow River was covered by ice every six months, snow lay on some plains year round and Greenland was covered by glaciers" - says Dr Helen Popova, who developed a unique physical-mathematical model of the evolution of the magnetic activity of the sun and used it to gain the patterns of occurrence of global minima of solar activity and gave them a physical interpretation.

If the similar reduction will be observed during the upcoming Maunder minimum this can lead to the similar cooling of the Earth atmosphere. According to Dr Helen Popova, if the existing theories about the impact of solar activity on the climate are true, then this minimum will lead to a significant cooling, similar to the one occurred during the Maunder minimum.

However, only the time will show soon enough (within the next 5-15 years) if this will happen.

"Given that our future minimum will last for at least three solar cycles, which is about 30 years, it is possible, that the lowering of the temperature will not be as deep as during the Maunder minimum. But we will have to examine it in detail. We keep in touch with climatologists from different countries. We plan to work in this direction", -- Dr Helen Popova said.

The notion that solar activity affects the climate, appeared long ago. It is known, for example, that a change in the total quantity of the electromagnetic radiation by only 1% can result in a noticeable change in the temperature distribution and air flow all over the Earth. Ultraviolet rays cause photochemical effect, which leads to the formation of ozone at the altitude of 30-40 km. The flow of ultraviolet rays increases sharply during chromospheric flares in the Sun. Ozone, which absorbs the sun's rays well enough, is being heated and it affects the air currents in the lower layers of the atmosphere and, consequently, the weather. Powerful emission of corpuscles, which can reach the Earth's surface, arise periodically during the high solar activity. They can move in complex trajectories, causing aurorae, geomagnetic storms and disturbances of radio communication.

By increasing the flow of particles in the lower atmospheric layers air flows of meridional direction enhance: warm currents from the south with even greater energy rush in the high latitudes and cold currents, carrying arctic air, penetrate deeper into the south. In addition, the solar activity affects the intensity of fluxes of galactic cosmic rays. The minimum activity streams become more intense, which also affects the chemical processes in the Earth's atmosphere

The study of deuterium in the Antarctic showed that there were five global warmings and four Ice Ages for the past 400 thousand years. The increase in the volcanic activity comes after the Ice Age and it leads to the greenhouse gas emissions. The magnetic field of the Sun grows, what means that the flux of cosmic rays decreases, increasing the number of clouds and leading to the warming again. Next comes the reverse process, where the magnetic field of the Sun decreases, the intensity of cosmic ray rises, reducing the clouds and making the atmosphere cool again. This process comes with some delay.

Dr Helen Popova responds cautiously, while speaking about the human influence on climate.

"There is no strong evidence, that global warming is caused by human activity. The study of deuterium in the Antarctic showed that there were five global warmings and four Ice Ages for the past 400 thousand years. People first appeared on the Earth about 60 thousand years ago. However, even if human activities influence the climate, we can say, that the Sun with the new minimum gives humanity more time or a second chance to reduce their industrial emissions and to prepare, when the Sun will return to normal activity", -- Dr Helen Popova summarized.