Human cells sense and communicate via cell surface receptors on their surface. Information about the environment is relayed to the inside of the cell through dynamic changes in their arrangement or conformation. To gain better understanding of these dynamics, researchers have developed a variety of imaging methods that allow them to observe receptors in real time.

Birthe Meineke and Johannes Heimgärtner have jointly developed a method in Simon Elsässer's lab at Science For Life Laboratory Stockholm to label and image receptors on live cells with two different colors. 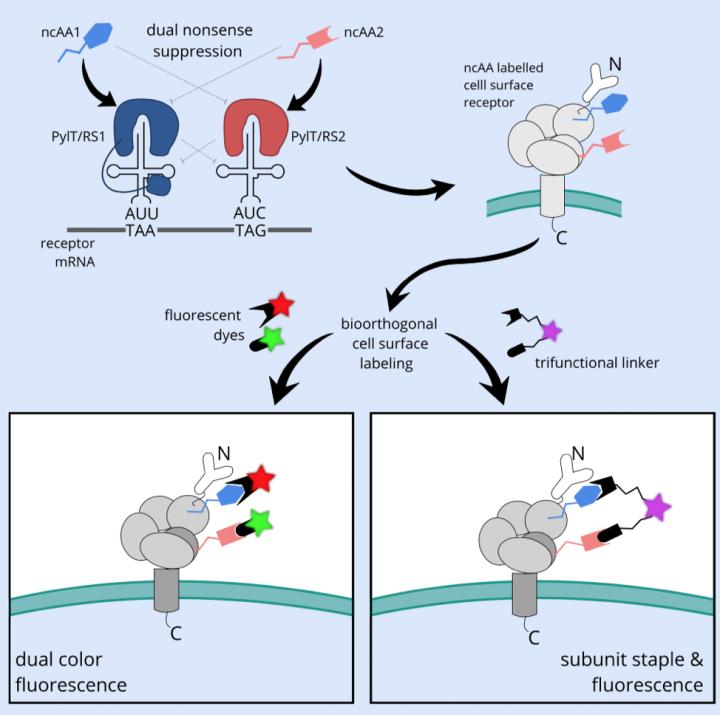 Unlike existing live-cell microscopy methods, which typically rely on sizeable fluorescent proteins fused to the receptor, here only two amino acids in the receptor of interest are exchanged for noncanonical amino acids. These two synthetic building blocks act as chemical handles, each compatible with a different fluorescent dye, using so-called bioorthogonal chemistry. The method allows for two differently colored dyes to be installed on live cells in almost any position of the receptor. Hence, fluorescent assays can be developed that not only read out the localization of the receptor, but also report on conformational changes involved in sensing the environment and transducing extracellular signals to the cells' interior.

Many receptors, such as the large family of G-protein coupled receptors, are important drug targets. Mechanistic insight into the action of drugs on those receptors has so far predominantly been collected on purified receptors in an in vitro environment. The new method, successfully demonstrated by the team on a G-protein coupled receptor and a Notch receptor, expands the possibilities to study natural behavior and pharmacology of receptors in their native setting in the membrane of live cells.