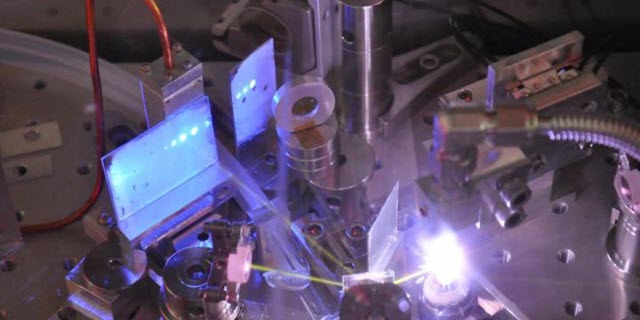 Ultrafast pulses of extreme ultraviolet light are created in a gas jet of white plasma, and are visible as blue dots on a phosphor screen as well as yellow beams from oxygen fluorescence.Credit: Research to Reality

For the first time, researchers have been able to record, frame-by-frame, how an electron interacts with certain atomic vibrations in a solid. The technique captures a process that commonly causes electrical resistance in materials while, in others, can cause the exact opposite—the absence of resistance, or superconductivity.

"The way electrons interact with each other and their microscopic environment determines the properties of all solids," said MengXing Na, a University of British Columbia (UBC) PhD student and co-lead author of the study, published last week in Science. "Once we identify the dominant microscopic interactions that define a material's properties, we can find ways to 'turn up' or 'down' the interaction to elicit useful electronic properties."

Controlling these interactions is important for the technological exploitation of quantum materials, including superconductors, which are used in MRI machines, high-speed magnetic levitation trains, and could one day revolutionize how energy is transported.

At tiny scales, atoms in all solids vibrate constantly. Collisions between an electron and an atom can be seen as a 'scattering' event between the electron and the vibration, called a phonon. The scattering can cause the electron to change both its direction and its energy. Such electron-phonon interactions lie at the heart of many exotic phases of matter, where materials display unique properties.

"Using an ultrashort laser pulse, we excited individual electrons away from their usual equilibrium environment," said Na. "Using a second laser pulse as an effective camera shutter, we captured how the electrons scatter with surrounding atoms on timescales faster than a trillionth of a second. Owing to the very high sensitivity of our setup, we were able to measure directly—for the first time—how the excited electrons interacted with a specific atomic vibration, or phonon."

The researchers performed the experiment on graphite, a crystalline form of carbon and the parent compound of carbon nanotubes, Bucky balls and graphene. Carbon-based electronics is a growing industry, and the scattering processes that contribute to electrical resistance may limit their application in nanoelectronics.

The approach leverages a unique laser facility conceived by David Jones and Andrea Damascelli, and developed by co-lead author Arthur Mills, at the UBC-Moore Centre for Ultrafast Quantum Matter. The study was also supported by theoretical collaborations with the groups of Thomas Devereaux at Stanford University and Alexander Kemper at North Carolina State University.

"Thanks to recent advances in pulsed-laser sources, we're only just beginning to visualize the dynamic properties of quantum materials," said Jones, a professor with UBC's SBQMI and department of Physics and Astronomy.

"By applying these pioneering techniques, we're now poised to reveal the elusive mystery of high-temperature superconductivity and many other fascinating phenomena of quantum matter," said Damascelli, scientific director of SBQMI.