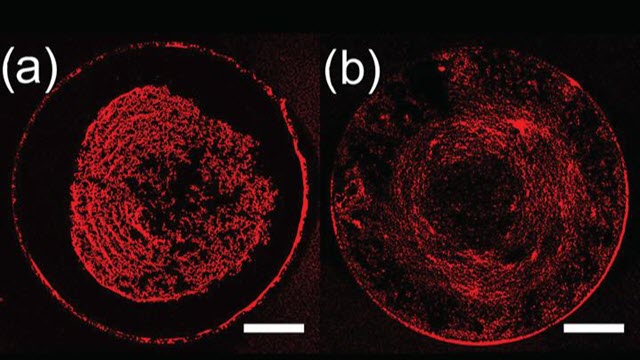 For figure A, there is particle transport to the apex of the target droplet and a dense center deposit is formed. For figure B, the final mapped deposit is more uniformCREDIT: Langmuir

A new manufacturing technique developed by researchers from Binghamton University, State University at New York may be able to avoid the "coffee ring" effect that plagues inkjet printers.

The outer edges of the ring that a coffee mug leaves behind are darker than the inside of the ring. That's because the solute is separated from the liquid during the evaporation process. That's what's called the coffee ring effect.

This same effect can happen with printers as well. When printing a text document, the text itself consists of an outline of the letters and the inside of the letters. While it may not be visible to the untrained eye, the outlines are actually darker than the inside. This happens during the drying process, just like the coffee ring effect, but researchers have wanted to find a way to remove this difference in pigmentation.

Assistant professor Xin Yong, professor Tim Singler and associate professor Paul Chiarot from Binghamton University's Mechanical Engineering Department recently made a discovery that could eliminate the difference between the outline and the inside that happens during evaporation.

They published their work, titled "Interfacial Targeting of Sessile Droplets Using Electrospray," in the journal Langmuir.

The team of experimentalists and theorists worked together to study the flow inside and on the surface of drying droplets to understand more about the coffee ring effect and how to avoid it. Using a unique technique called electrospray, they applied a high voltage to a liquid to produce an aerosol to add nanoparticles to the droplets. Nanoparticles are often useful for researchers due to their small size and large surface area.

This technique allowed for a more even dispersal of ink and stopped the coffee ring effect.

In the research paper, the team said, "To our knowledge, we are among the first to use electrospray for this purpose to explore interfacial particle transport and to elucidate the role of surfactants in governing particle motion and deposit structure."

While this difference in quality may not affect the standard user's print job, it will have a substantial effect on the capabilities of additive manufacturing and biotechnology, where printing films in a uniform way is extremely important.