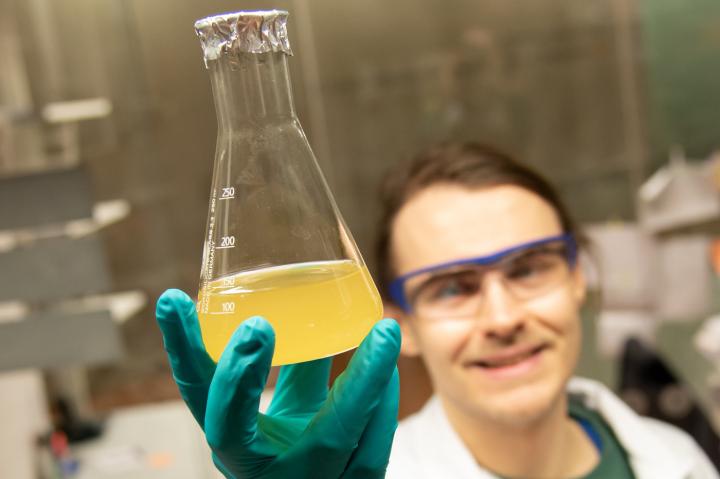 Baker's yeast (Saccharomyces cerevisiae) is an ideal model organism for autophagy research. Its fundamental cellular structure is similar to animal cells and it is very easy to grow in culture.
MPI for Biology of Ageing

There is a constant spring-cleaning in our cells: The cell's own recycling system, so-called autophagy, fills garbage bags with cellular waste, transports them to the recycling yard and makes the decomposed material available again. Researchers from the Max Planck Institute for Biology of Ageing in Cologne, Germany, have now been able to show in the model organism yeast that the membrane of the garbage bags, known as autophagosomes, is newly produced on the spot around the garbage and not built of already existing components.

The self-renewal of cells through autophagy is a central process in the body. It also plays a role in ageing and many age-related diseases. The rule of thumb is: the more recycling, the longer you live. "If we manage to optimize the autophagy machinery, this could improve health in old age, but of course we first need to understand precisely how it works," explains Martin Graef, research group leader at the Max Planck Institute.

Therefore, Maximilian Schütter, a doctoral student in Martin Graef's research group, took a close look at how the garbage bags are made. These so-called autophagosomes consist of phospholipid membranes that form around the cellular waste and then transport it for recycling. Until now, it has always been assumed that membranes already present in the cell are assembled around the waste. However, the researchers have now been able to show that the membrane is instead newly formed on the spot. To do this, a protein located on the membrane of the autophagosomes activates free fatty acids and makes them available for the production of phospholipids, which are then incorporated into the expanding membrane.

"This discovery is so fundamental that not only our view of autophagy has changed, but many new research approaches are opening up," explains Graef. It is known, for example, that recycling in the cells deteriorates when a diet is very rich in fat. "We may have found an explanation for this. Since free fatty acids are incorporated into the membrane, a change in the composition of the fats might have a direct effect on autophagy as a result of a different diet."