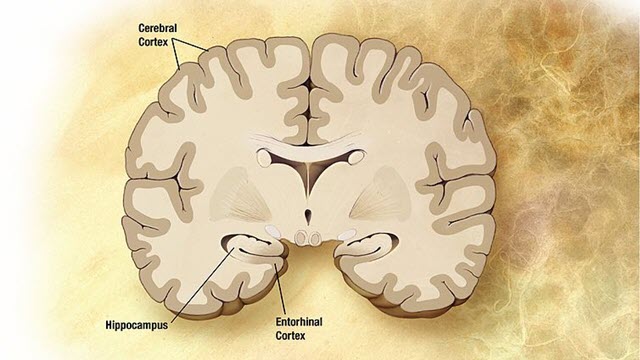 Diagram of a normal brainCredit: the National Institute on Aging

Diagnosing Alzheimer's disease can be difficult, as several other conditions can cause similar symptoms. Now, a new brain imaging method can show the spread of specific tau protein depositions, which are unique to cases with Alzheimer's.

"The method works very well. I believe it will be applied clinically all over the world in only a few years", says Oskar Hansson. Hansson is a professor of clinical memory research at Lund University in Sweden who has led a major international study on the new method.

There are two proteins that are known to be linked to Alzheimer's disease—beta-amyloid, which forms what is known as plaque in the brain, and tau, which forms tangles within the brain cells. Beta-amyloid spreads throughout the brain at an early stage, decades before the patient notices signs of the disease. Tau, on the other hand, starts to spread at a later stage, from the temporal lobes to other parts of the brain.

"It is when tau begins to spread that the neurons start dying and the patient experiences the first problems with the disease. If we scan a patient with memory difficulties and he or she proves to have a lot of tau in the brain, we know with a high degree of certainty that it is a case of Alzheimer's," says senior researcher Rik Ossenkoppele, Lund University and Amsterdam University Medical Center.

He is the first author, and Oskar Hansson the last author, of an article recently published in the reputable medical journal JAMA (Journal of the American Medical Association). The article presents a study of more than 700 patients. Besides Lund-Malmö in southern Sweden, researchers from San Francisco and Seoul took part in the study, and the patients were diagnosed in memory clinics from these regions.

The presence of tau in the brain was revealed by a PET scanner, a medical imaging technology that uses radioactive markers that make their way to different areas in the body.

"We administer the special tau marker intravenously to the patient. If the patient has tau in certain parts of the brain, the marker will detect it. The result—whether Alzheimer tau is present or not—is very clearly visible on the PET images," says Oskar Hansson.

The international study showed that the new tau-PET method had both great sensitivity and specificity: it detected 90-95 per cent of all cases of Alzheimer's and gave only few false positive results in patients with other diseases. The tau-PET method had clearly superior diagnostic accuracy compared to MRI, and fewer false positive results than beta-amyloid PET, two methods that are routinely used today. Tau-PET should therefore be of great use in the investigation of patients with memory problems, as soon as the method is approved for clinical use.

"If you are found to have tau in the brain according to tau-PET, it is, with few exceptions, due to Alzheimer's disease. If you have normal tau-PET and mild to moderate dementia, your memory problems are most likely due to other neurological diseases," summarizes Oskar Hansson.

Although there is currently no cure for Alzheimer's, it is still important for patients to receive the correct diagnosis. On the one hand, the patient can be given symptom-relieving medication, and on the other, physical activity, a good diet and a correct dosage of the patient's other medication can optimize cognitive ability. The tau-PET method could also be valuable in trials of new medication against Alzheimer's, as it can show whether new drugs have succeeded in preventing the spread of tau in the brain.