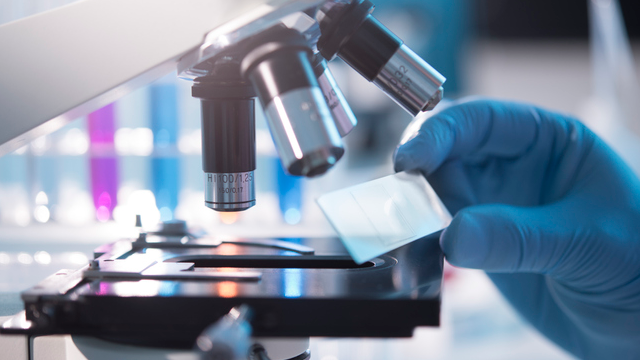 The sharpness of a light microscope is limited by physical conditions: structures that are closer together than 0.2 thousandths of a millimeter blur into each other—they can no longer be distinguished from each other. The cause of this blurring is diffraction: In simple terms, it prevents that light rays can not be bundled with arbitrary precision. Each point-shaped object is therefore not shown as a point, but as a "blurry spot."

With mathematical methods, the resolution can still be drastically improved. One would calculate its exact center from the brightness distribution of the "blurry spot." However, it only works if two closely adjacent points of the object are initially not simultaneously but subsequently visible, and are merged later in the image processing. This temporal decoupling prevents superimposition of the "blurry spot." Researchers in life sciences have been using this tricky method for some years, for super high-resolution light microscopy of cells.

One type of this method was developed in the research group of Dr. Markus Sauer at the University of Würzburg: direct stochastic optical reconstruction microscopy (dSTORM). This powerful SMLM technique can provide a lateral resolution of ~ 20 nm. For this purpose, certain structures—for example a pore of a cell nucleus—are stained with fluorescent dyes. Each of the dye molecules blinks at irregular intervals and represents part of the pore. The image of the complete nuclear pores is therefore not initially visible, but arises after the image processing by the superposition of several thousand images. With the dSTORM technique, the resolution of a conventional light microscope can be increased by a factor of 10. "It allows, for example, to visualize the architecture of a cell down to its molecular level," explains Hannah Heil, who is doing her doctorate at the Rudolf Virchow Center of the University of Würzburg in the group of professor Katrin Heinze.

However, the photon statistics itself define a virtual resolution limit in resolution. To address this issue, Heinze had the idea to use relatively simple biocompatible nanocoatings to boost the signal. In a joined effort with Markus Sauer and colleagues from the faculty of physics, Heil designed and fabricated metal-dielectric nanocoatings that behave like a tunable mirror. It almost doubles the resolution.

Mirror, mirror on the wall: Which image is the sharpest of them all?

They vapor-deposited a coverslip, on which the cells are placed during observation, with a thin reflective nano-coating consisting of silver and transparent silicon nitrite. The coating is biocompatible, so it does not damage the cell. With this method, the two groups achieved two effects: on the one hand, the mirror reflected the light emitted to the microscope, which increased the brightness of the fluorescence signal and thus also the effective image sharpness.

There is also a second phenomenon: the emitted and the reflected light waves are superimposed. This creates so-called interference. Depending on the distance to the mirror, the light is amplified or attenuated. "In this way, we primarily see structures in a certain image plane," says Heil. "Everything that is above or below and could possibly disturb the image is, on the other hand, hidden." To ensure that the exact parts of the image become visible, the thickness of the transparent layer applied to the mirror must be chosen appropriately. Among other things, Heinze and Heil use computer simulations to tailor the coating according to the object.

Overall, the method is surprisingly easy to use, says Heil. "That's what I really like about our approach." Heinze adds: "Except for the cheap metal-dielectric coated coverslip there is no need of any additional microscope hardware or software to boost the localization precision, and thus is a fantastic add-on in advanced microscopy."