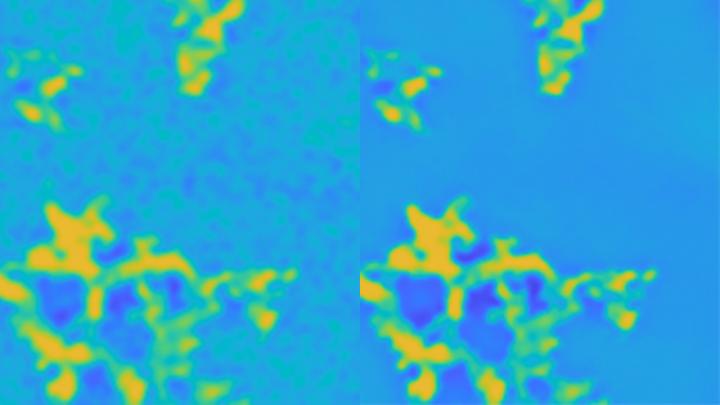 Left and right show false-colored electron microscopic images of the same region on the specimen. But the image on the right has been super resolved using Dr. Yu Ding's new image processing method.
Texas A&M University College of Engineering

Since the early 1930s, electron microscopy has provided unprecedented access to the alien world of the extraordinarily small, revealing intricate details that are otherwise impossible to discern with conventional light microscopy. But to achieve high resolution over a large specimen area, the energy of the electron beams needs to be cranked up, which is costly and detrimental to the specimen under observation.

Texas A&M University researchers may have found a new method to improve the quality of low-resolution electron micrographs without compromising the integrity of specimen samples. By training deep neural networks, a type of artificial intelligence algorithm, on pairs of images from the same sample but at different physical resolutions, they have found that details in lower-resolution images can be enhanced further.

"Normally, a high-energy electron beam is passed through the sample at locations where greater image resolution is desired. But with our image processing techniques, we can super resolve an entire image by using just a few smaller-sized, high-resolution images," said Dr. Yu Ding, Mike and Sugar Barnes Professor in the Wm Michael Barnes '64 Department of Industrial and Systems Engineering. "This method is less destructive since most parts of the specimen sample needn't be scanned with high-energy electron beams."

The researchers published their image processing technique in Institute of Electric and Electronics Engineers' Transactions on Image Processing in June.

Unlike in light microscopy where photons, or tiny packets of light, are used to illuminate an object, in electron microscopy, a beam of electrons is utilized. The electrons reflected from or passing through the object are then collected to form an image, called the electron micrograph.

Thus, the energy of the electron beams plays a crucial role in determining the resolution of images. That is, the higher the energy electrons, the better the resolution. However, the risk of damaging the specimen also increases, similar to how ultraviolet rays, which are the more energetic relatives of visible light, can damage sensitive materials like the skin.

"There's always that dilemma for scientists," said Ding. "To maintain the specimen's integrity, high-energy electron beams are used sparingly. But if one does not use energetic beams, high-resolution or the ability to see at finer scales becomes limited."

The researchers turned to pairs of low- and high-resolution electron microscopic images for a given sample. Although these types of pairs are not very common in public image databases, they are relatively common in materials science research and medical imaging.

For their analyses, Ding and his team used 22 pairs of images of materials infused with nanoparticles. They then divided the high-resolution image and its equivalent area in the low-resolution image into three by three subimages. Next, each subimage pair was used to "self-train" deep neural networks. Post-training, their algorithm became familiar at recognizing image features, such as edges.

When they tested the trained deep neural network on a new location on the low-resolution image for which there was no high-resolution counterpart, they found that their algorithm could enhance features that were hard to discern by up to 50 percent.

Although their image processing technique shows a lot of promise, Ding noted that it still requires a lot of computational power. In the near future, his team will be directing their efforts in developing algorithms that are much faster and can be supported by lesser computing hardware.

"Our paired image processing technique reveals details in low-resolution images that were not discernable before," said Ding. "We are all familiar with the magic wand feature on our smartphones. It makes the image clearer. What we aim to do in the long run is to provide the research community a similar convenient tool for enhancing electron micrographs."

- This press release was originally published on the TAMU Engineering website