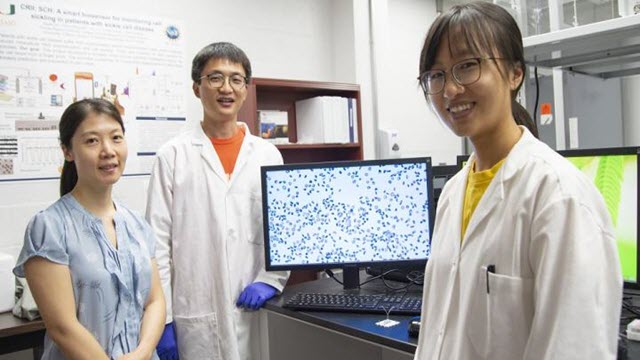 Human red blood cells (RBCs) are extremely resilient and have the capacity to undergo cellular deformation as they navigate across various micro-vessels and capillaries. Over their 120-day normal lifespan, RBCs must undergo significant cyclic deformation through large elastic stretching and relaxation. Pathological deformations in RBCs are associated with various diseases such as malaria, sickle cell anemia, diabetes, myocardial infarction, and various hereditary disorders.

Mechanical fatigue that arises from cyclic straining in RBCs also is a key factor in the degradation of engineered materials and structures. This fatigue can damage and fracture natural biomaterials like bone as well as synthetic biomaterials used in implant devices such as dental implants and synthetic heart valves. However, the mechanisms responsible for the degradation of circulating biological cells due to mechanical fatigue are not well-understood, especially in human RBCs. Measuring the complex and clinically relevant mechanical fatigue behavior of biological cells in health and disease has challenged scientists for decades.

Researchers from Florida Atlantic University's College of Engineering and Computer Science, in collaboration with Massachusetts Institute of Technology, and the Nanyang Technological University in Singapore, have developed a novel way to measure how mechanical fatigue affects biological cells. Furthermore, they have established the important role of this effect in influencing physical properties of biological cells such as RBCs.

Results of the study, published in the Proceedings of the National Academy of Sciences, also provide insights into the accumulated membrane damage during blood circulation, paving the way for further investigations of the eventual failure of RBCs and the mechanism that causes their destruction in various blood disorder pathologies such as sickle cell anemia.

This new technique assesses the mechanical integrity and fatigue behavior of RBCs using a general microfluidics method that incorporates amplitude-modulated electro-deformation. It induces static and cyclic mechanical deformation of RBCs and measures systematic changes in morphological and biomechanical characteristics of healthy human RBCs and their membrane mechanical properties. This method also is capable of subjecting cells to static loads for prolonged periods of time or to large numbers of controlled mechanical fatigue cycles.

"The fatigue testing platform that we have developed features multiple and distinctive advantages for the quantitative characterization of mechanical fatigue behavior of single biological cells," said Sarah Du, PhD, a senior author and an associate professor in FAU's Department of Ocean and Mechanical Engineering. "The strengths of our method lie in its simplicity and flexibility to impose controlled mechanical loads at selected frequencies and waveforms, and its capability to probe a number of single cells over thousands of fatigue cycles."

The researchers wanted to better understand the effect of fluctuations in stresses or deformation of a healthy biological cell on its mechanical and physical characteristics, structural integrity and performance. They also wanted to identify the function of factors such as the maximum intensity, amplitude and rate of strain, frequency of cyclic deformation, and number of cycles as well as whether or not this effect is specific to cyclic variations in deformation.

"This cutting-edge technique developed by Professor Du and her group will be a game changer, which will help scientists to better understand the biological functions of red blood cells and other cells that impact many aspects of human health," said Stella Batalama, PhD, dean of FAU's College of Engineering and Computer Science. "In addition, this unique method has important applications for mechanical fatigue studies in conjunction with other microenvironments related to health and materials engineering."