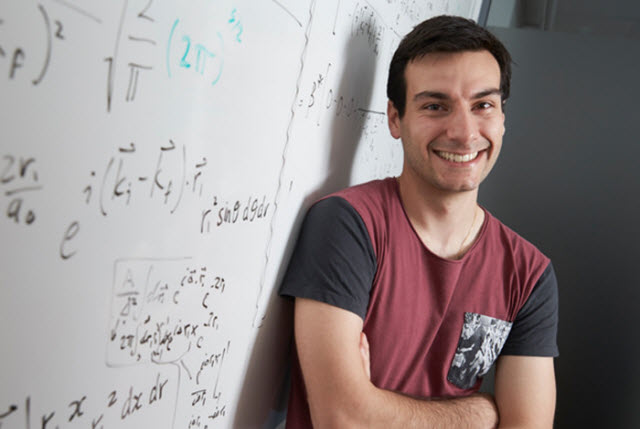 Mark Zammit, of Los Alamos’ Physics and Chemistry of Materials group, is part of a team that developed a theoretical model to forecast the fundamental chemical reactions involving molecular hydrogen.Photo credit: Curtin University

Understanding of molecular hydrogen has implications from industry to medicine

LOS ALAMOS, N.M., June 28, 2016—A team of researchers from Los Alamos National Laboratory and Curtin University in Australia developed a theoretical model to forecast the fundamental chemical reactions involving molecular hydrogen (H2), which after many decades and attempts by scientists had remained largely unpredicted and unsolved.

“Chemical reactions are the basis of life so predicting what happens during these reactions is of great importance to science and has major implications in innovation, industry and medicine,” said Mark Zammit, a post-doctorate fellow in the Physics and Chemistry of Materials group at Los Alamos National Laboratory. “Our model is the first to very accurately calculate the probability of fundamental electron-molecular hydrogen reactions.”

Zammit and the team conducted research into the fundamental chemical reactions of atoms and molecules to better understand the physics and chemistry of materials. This work is part of Los Alamos’ Nuclear and Particles Future science pillar, which supports the Lab in its national security mission by integrating nuclear experiments, theory, and simulation to understand and engineer complex nuclear phenomena.

Molecular hydrogen—two hydrogen atoms bound together—is the most abundant molecule in the universe. It is present in interstellar space and in the atmospheres of gas giants. It is used industrially in the production of fossil fuels, cleaning products, and plasmas. It also has therapeutic potential in human organs.

In interstellar space, solar winds (a source of electrons) collide with gas clouds of H2, which then emit light. This light carries vital information about past events in the universe. To decipher this information, scientists look at the underlying chemical reaction that took place, which is relatively simple—an electron colliding with H2.

Starting from the first principles of quantum mechanics and utilizing supercomputers, Zammit and the team’s program calculate the probability of chemical reactions, such as the ionization (removal of an electron), or electron excitation of a molecule. Their model’s new results for electrons colliding with H2 agree with accurate experiments and will have direct implications in the modeling of fusion plasmas, design of aerospace materials (for atmospheric entry), astrophysics, and atmospheric modeling.

These results will also be used to understand basic questions about nature such as the cooling mechanisms of the early universe and the formation of planets and stars.

With the framework of the method set, Zammit and colleagues are now turning their attention to other molecules of astrophysical, medical, and industrial importance, as well as extending the method to model molecular collisions with positrons, protons, and anti-protons.

This research was recently published in the journal Physical Review Letters and will be the subject of several presentations at international conferences and coordinated research projects this year.

Zammit earned his doctoral degree from Curtin University in Physics. He was a recipient of the Australian Postgraduate Award, the Centre for Antimatter-Matter Studies scholarship, and the Curtin Research Scholarship and Faculty Postgraduate Award, which is awarded to the highest ranked PhD candidate in each faculty. Zammit was named the ExxonMobil Student Scientist of the Year in 2014, an honor for one in a pool of more than 1000 doctoral students in the State of Western Australia.