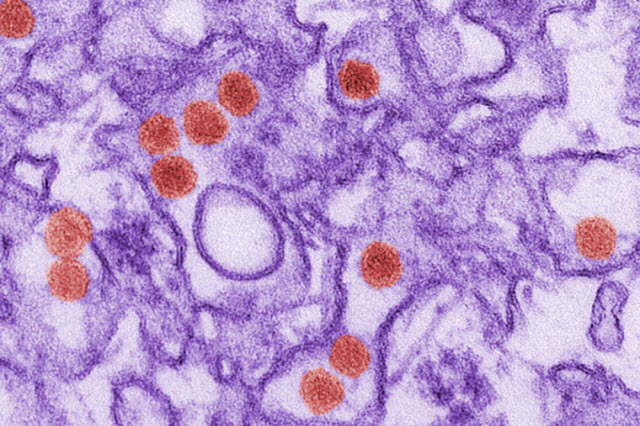 A transmission electron micrograph image of the Zika virus.Image credit: Centers for Disease Control And Prevention

A research team at Washington University School of Medicine in St. Louis has established a mouse model for testing of vaccines and therapeutics to battle Zika virus.

The mouse model mimics aspects of the infection in humans, with high levels of the virus seen in the mouse brain and spinal cord, consistent with evidence showing that Zika causes neurological defects in human fetuses. Interestingly, the researchers detected the highest levels of the virus in the testes of male mice, a finding that supports clinical data indicating the virus can be sexually transmitted.

The new research was published April 5 in Cell Host & Microbe.

“Now that we know the mice can be vulnerable to Zika infection, we can use the animals to test vaccines and therapeutics–and some of those studies are already underway–as well as to understand the pathogenesis of the virus,” said senior author Michael Diamond, MD, PhD, a professor of medicine at Washington University.

The new model of Zika virus infection, along with another recently identified by scientists at the University of Texas Medical Branch, are the first to be developed since 1976. The earlier models were not as clinically relevant because the infections were generated by injecting the virus directly into the brain. In the new models, infection occurs via the skin, much like the bite of the mosquito that spreads the virus.

The ongoing Zika virus outbreak in Latin America and the Caribbean has created an urgent need for identifying small animal models as a first step toward developing vaccines and treatments to fight the infection. The infection has been linked to microcephaly, a condition in which infants are born with unusually small heads and brain damage. In adults, the virus is thought to be related to rare cases of Guillian-Barré syndrome, an illness that can cause temporary paralysis.

For the new study, researchers in Diamond’s laboratory, led by first author Helen Lazear, PhD, now at the University of North Carolina at Chapel Hill, tested five strains of the Zika virus in the mice: the original strain acquired from Uganda in 1947; three strains that circulated in Senegal in the 1980s; and the French Polynesian strain, which caused infections in 2013 and is nearly identical to the strain causing the current outbreak. All yielded similar results in the animals, suggesting that there may not be much difference in the pathogenicity between individual strains, at least in this mouse model. Tests with the viral strains from the current Zika outbreak are ongoing.

Because Zika typically has trouble establishing infections in mice, the researchers used animals that were genetically altered so that they could not produce interferon, a key immune system signaling molecule, thus dampening the animals’ immune response to the virus.

“If you take away interferon, the Zika virus replicates quite well in the mouse and goes to the sites that we see it causing disease in humans,” said Diamond, an expert in viral immunology. He also is a professor of molecular microbiology and of pathology and immunology.

The immune-deficient mice lost weight, became lethargic and died within ten days of infection. In contrast, normal laboratory mice included in the study only developed severe symptoms of Zika infection if they were infected soon after birth, under one week of age, before their immune systems were developed.

That finding parallels what is seen in humans. “It appears that pregnant women infected with Zika can pass the virus to babies in utero and that newborns also may be susceptible to infection,” said Diamond, also an associate director of the university’s Center for Human Immunology and Immunotherapy Programs. “Other than in infants, we don’t really see severe disease in most people with Zika, except for a small fraction who develop Guillian-Barré.”

He was inspired to pursue Zika research after a meeting at the National Institutes of Health (NIH) in June 2015, where Brazilian scientists described accounts of a rise in birth defects related to a local Zika outbreak. He returned to St. Louis and shifted several members of his lab to studying Zika, including developing mouse models of the disease.

As new clinical information becomes available about the virus in humans, Diamond has pivoted his research to investigate suspected links in mice.

“We looked for evidence of Zika in the mouse testes mostly as an afterthought, due to mounting evidence of sexual transmission and were surprised that viral levels were the highest we saw in any tissue,” Diamond noted. “We are now doing subsequent tests to determine how  long those viral levels are sustained, which could help us estimate the length of time Zika can be transmitted sexually.”