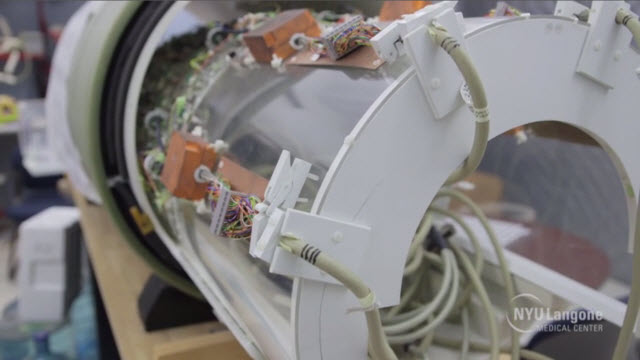 A new technology harnesses imperfections that typically compromise MRI exams to create images resolved enough to enable consistent diagnoses across populations for the first time. These are findings of a study led by NYU Langone Medical Center and published August 16 in Nature Communications.

Since its emergence in the 1970s, magnetic resonance imaging (MRI) has given physicians a better look inside tissues, helping to diagnose maladies from brain tumors to internal bleeding to torn ligaments. Such scans are woven into every part of medicine, with U.S. physicians now ordering upwards of 28 million per year.

Despite this impact, all MRI scanners have the same problem.

During a scan, antennas hit the atoms making up tissues with radio waves that tip them out of their magnetic equilibrium. Once tipped, the atoms' magnetic forces spin like tops to emit radio signals that reveal their identity and position, the building blocks of an image. The quality of an image, however, depends on equal exposure of atoms to magnetic fields, which not only vary scanner to scanner, but also in their interactions with different parts of even a single tissue sample.

Thus, traditional MRI radio waves "light up" some parts of a sample better than others, with imperfections blacking out areas of images. Industry has invested heavily in magnetic coils that seek to force uniform exposure, but many MR exams today still yield darkened "artifacts."

"The advances outlined in our study eliminate artifacts and create images accurate enough that we can now assign numerical values to anatomical features," says study author Daniel Sodickson, MD, PhD , professor in the Department of Radiology , member of the Perlmutter Cancer Center at NYU Langone, and director of the Bernard and Irene Schwartz Center for Biomedical Imaging .

"This marks the advent of 'quantitative MRI,' where new kinds of tissue maps become the gold standard for diagnoses and reveal disease patterns that are consistent from patient to patient," says Sodickson, also lead investigator for the Center for Advanced Imaging Innovation and Research . "It will turn scanner design on its head."

The new approach also promises to accomplish superior imaging with less expensive machines, a must in the face of the cost cutting underway in healthcare, the authors say. Faster, simpler approaches would also solve the problem of scanners that, elaborately equipped to correct for field variations, require meticulous calibration and lengthen exam time beyond what some patients can tolerate.

Throwing Out the Ideal Scanner

Despite decades of massive investment, traditional MRI still yields only qualitative images that are not resolved enough to guide database-driven diagnoses and research in the age of "big data."

A new effort to overcome these challenges began with work led by Mark Griswold at Case Western Reserve University and published in Nature in 2013 , which described magnetic resonance fingerprinting (MRF). Prior to that, MRI scanners had to wait for the magnetic spins to return to their normal equilibrium between each sequential radio wave pulse, a profound hindrance to imaging speed. MRF instead built images from the complex interplay of overlapping signals, a distinctive "fingerprint" matched to tissue qualities.

With advances in computation, MRF images were built on a small fraction of the scanner data matched to databases of known tissue patterns. The method replaced slower approaches required to process all the data to build an image from scratch. Despite this innovation, the first author of the current paper, NYU Langone magnetic resonance (MR) physicist Martijn Cloos, PhD , who is also an assistant professor in the Department of Radiology, saw that MRF was held back by its attempt match the "real" spins it captured to patterns from a simulated scanner calibrated to offer perfectly uniform exposure.

Unable to force uniformity, MRF images did not always reflect reality. To correct this, Cloos and colleagues designed "Plug-and-Play MR Fingerprinting" (PnP-MRF), which embodied their decision to "throw out the ideal scanner."

Described in the newly published study, PnP-MRF matches its measurements to a simulated database of every possible magnetic field interaction or distortion as it builds images, and so requires zero calibration. Along with capturing spin characteristics, the new method was shown to effectively map the distortions that occur as MR radio waves interact with tissue, which radiologists had previously sought to erase via calibration. The study authors argue that these same field distortions also serve as a new set of tissue parameters that can aid in diagnoses.

Where MRF used a single source of radio wave pulses to generate signals, PNP-MRF is a circling strobe light of many broadcast magnetic fields, hitting the atoms from different directions separated by milliseconds to create a new kind of fingerprint. An artifact introduced by any one radio wave pulse may show a dark spot in one version of an image, but not in the same place in all data sets, enabling the dismissal of errors.

Taken together, these innovations enable PnP-MRF to correct for each scanner's peculiarities and magnetic field-tissue interactions, conclusions confirmed by a series of numerical and tissue experiments.

"In our design, the complexity in creating MRI images has moved from the machinery to the computation," says Cloos. "Rather than building chambers to house extensive magnet coils that fight non-uniformities, near-future scanners, by embracing heterogeneous fields, will consist of simple tabletop magnets, or possibly even hand-held MRI wands."