This diagram shows the difference between regular and plasmonic gratings in terms of fluorescent intensity.Image Courtesy of: Shubhra Gangopadhyay/Nanoscale. 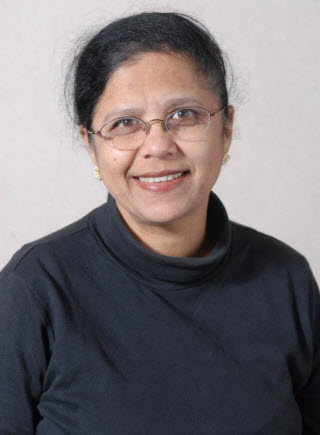 "Usually, scientists have to use very expensive microscopes to image at the sub-microscopic level," said Gangopadhyay, the C.W. LaPierre Endowed Chair of electrical and computer engineering in the MU College of Engineering. "The techniques we've established help to produce enhanced imaging results with ordinary microscopes. The relatively low production cost for the platform also means it could be used to detect a wide variety of diseases, particularly in developing countries."

The team's custom platform uses an interaction between light and the surface of the metal grating to generate surface plasmon resonance (SPR), a rapidly developing imaging technique that enables super-resolution imaging down to 65 nanometers—a resolution normally reserved for electron microscopes. Using HD-DVD and Blu-Ray discs as starting templates, a repeating grating pattern is transferred onto the microscope slides where the specimen will be placed. Since the patterns originate a widely used technology, the manufacturing process remains relatively inexpensive.

"In previous studies, we've used plasmonic gratings to detect cortisol and even tuberculosis," Gangopadhyay said. "Additionally, the relatively low production cost for the platform also means it could be used to further detect a wide variety of diseases, particularly in developing countries. Eventually, we might even be able to use smartphones to detect disease in the field."

Gangopadhyay's work also highlights the collaborations that are possible at the Mizzou. Working with the MU Departments of Bioengineering and Biochemistry, the team is helping to develop the next generation of undergraduate and graduate students. Patents and licenses developed by MU technologies help create and enhance relationships with industry, stimulate economic development, and impact the lives of state, national and international citizens.

"Plasmonic gratings with nano-protrusions made by glancing angle deposition (GLAD) for single-molecule super-resolution imaging" recently was published in Nanoscale, a journal of the Royal Society of Chemistry. The National Science Foundation provided partial funding for the studies. The content is solely the responsibility of the authors and does not necessarily represent the official views of the funding agency.