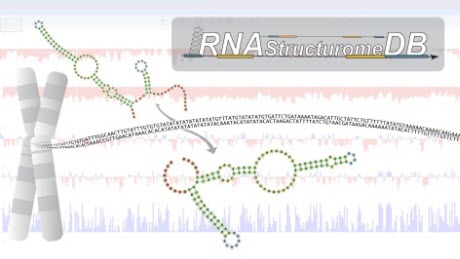 RNAs, short for ribonucleic acids, are molecular chains that are transcribed, or copied, from the genome. RNAs can be information carriers, acting as intermediates between DNA and protein, or as independently functioning molecules that mediate many critical regulatory processes. Unlike DNA, RNA can “fold back” on itself to form structures that rival proteins in their complexity. This folding plays key roles in RNA function, so gaining structural information on RNA can provide important insights into our understanding of how organisms work, Moss said.

“RNA is fundamental to understanding biology, and advances in sequencing technology have led to an explosion in the list of potentially functional RNAs,” he said.

For example, while only about two percent of the 3.5 billion base pairs of human DNA encode proteins, more than 70 percent is transcribed into RNA. Understanding the functions of this ocean of uncharted RNA poses a key scientific challenge, and the new database provides crucial tools for charting it, Moss said.

Moss, along with graduate student Ryan Andrews and research IT director Levi Baber, fragmented the entire human genome into more than 154 million overlapping windows and calculated a range of metrics valuable in understanding how RNA folds.

“Anyone around the world can now retrieve with one click what once took hours of calculations to determine,” Andrews said.

RNA therapeutics, a new approach in medicine in which RNA is targeted with drugs rather than proteins, show great promise, and the structural database detailed in the publication provides a huge repository of potential therapeutic leads, Moss said.

A New Era for Biology: Opportunities and Challenges of Macrogenetics

A New Era for Biology: Opportunities and Challenges of Macrogenetics