The Journal of Parasitology – A team of American parasitologists has discovered a new species of parasitic flatworm that infects turtles in Malaysia. The new species is so unusual and distinctive that the research team has named a new genus to include the new species. This is the first time such an action has been taken for this group of turtle parasites in 21 years. The researchers have named their discovery in honor of President Barack Obama. Details about the proposed new genus and species, Baracktrema obamai, are presented in an article in the current issue of The Journal of Parasitology. 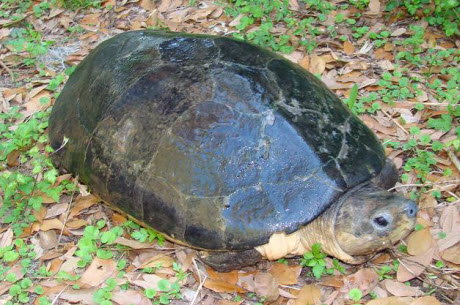 The new species of parasite infects Malaysian Freshwater Turtles.Photo credit: Cowbongo, wikimedia commonsThese turtle parasites are distant relatives and likely ancestors of the parasitic flatworms that cause the human disease schistosomiasis, a devastating disease that debilitates millions of people in developing countries annually. Researchers say that studying the evolutionary history of this group of worms could broaden our understanding of the origins and evolution of schistosomiasis and help point the way to helpful new approaches for studying how the disease causes harm. Another aspect of the study, which was funded by the National Science Foundation, emphasized the fact that freshwater turtles worldwide are increasingly vulnerable to poaching and habitat loss; many species are threatened or endangered.

Although many people understandably view parasites negatively, Dr. Thomas R. Platt, an authority on turtle parasites who initially discovered and collected the new species, emphasized that those who study the organisms see them as beautiful and resilient. They “face incredible obstacles to complete their journey (life cycle) and must contend with the immune system of the host in order to mature and reproduce,” he said recently.

Baracktrema obamai was the last organism new to science that Platt found before he retired from Saint Mary’s College in Indiana. Naming a species after an individual is not uncommon and is typically viewed as an honor. He was inspired to name his discovery after Obama when genealogy research traced his and the president’s families back to a common ancestor. “I have named a number of species after people I admire, from my father-in-law, my PhD advisor, and good friends who are academics and/or amateur naturalists,” Platt said. “Baracktrema obamai will endure as long as there are systematists studying these remarkable organisms.”

Platt and his co-authors, Jackson Roberts, Dr. Raphael Orélis-Ribeiro, and Dr. Ash Bullard, of Auburn University in Alabama, based their new finding on specimens taken from two turtle hosts. They analyzed the evolutionary history of the worm and its relationship to other turtle parasites, including the closely related Unicaecum, using a combination of genetic and morphological information. Their results affirmed that the newly discovered worm should belong in its own genus, a means of further separating the new species from all previously discovered organisms. The final conclusion: like Platt and Obama, Baracktrema and Unicaecum share a recent common ancestor!

Full text of the article “New Genus of Blood Fluke (Digenea: Schistosomatoidea) from Malaysian Freshwater Turtles (Geoemydidae) and Its Phylogenetic Position Within Schistosomatoidea,” Journal of Parasitology, Vol. 102, No. 4, 2016, is now available at http://www.journalofparasitology.org/doi/full/10.1645/15-893.