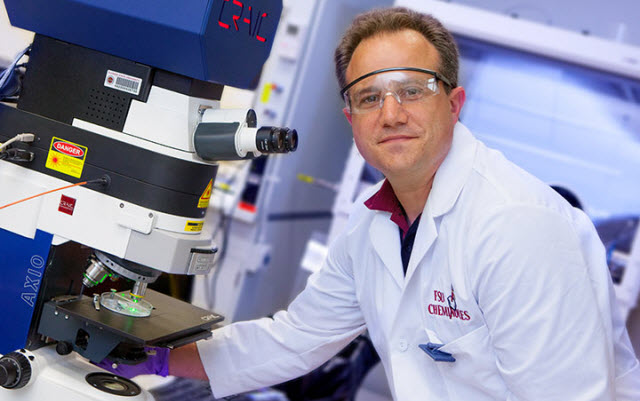 Plutonium has long been part of many countries’ nuclear energy strategies, but scientists are still unlocking the mysteries behind this complicated element and seeing how they can use heavier, nuclear elements to clean up nuclear waste.

Now, new research by Florida State University professor Thomas Albrecht-Schmitt shows that plutonium doesn’t exactly work the way scientists thought it did. The findings will contribute to his team’s efforts to develop technologies to clean up nuclear waste.

The work was published May 8 in Nature Chemistry.

Albrecht-Schmitt and a team of researchers have been studying plutonium—Pu on the Periodic Table of Elements—for almost two decades to understand how it behaves chemically, and how it differs from lighter elements like iron or nickel. To Albrecht-Schmitt’s surprise, a plutonium-organic hybrid compound that his team assembled in the lab behaved much like compounds made with lighter elements.

“What makes this discovery so interesting is that the material—rather than being really complicated and really exotic—is really, really simple,” Albrecht-Schmitt said. “Your imagination goes wild, and you think ‘Wow, I could make that class of compound with many other types of heavy elements.’ I could use other heavy elements like uranium or maybe even berkelium.”

Albrecht-Schmitt said his team immediately realized there was something unique about the compound they had engineered in the lab simply because of its color.

“Plutonium makes wild, vibrant colors,” Albrecht-Schmitt said. “It can be purple, it can be these beautiful pinks. It can be this super dark black-blue. This compound was brown, like a beautiful brown chocolate bar. When we saw that color, we knew something was electronically unusual about it.”

Albrecht-Schmitt’s work is part of his lab’s overall mission to better understand the heavier elements at the very bottom of the periodic table. Last year, he received $10 million from the Department of Energy to form a new Energy Frontier Research Center that will focus on accelerating scientific efforts to clean up nuclear waste.

“In order to develop materials that say trap plutonium, you first have to understand at the most basic level, the electronic properties of plutonium,” Albrecht-Schmitt said. “So that means making very simple compounds, characterizing them in exquisite detail and understanding both experimentally and theoretically all of the properties you’re observing.”

Albrecht-Schmitt and his research team have conducted similar work on the elements californium and berkelium.

The work is funded by the U.S. Department of Energy.