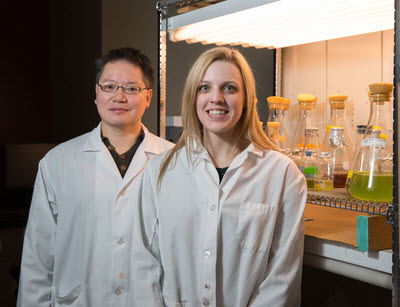 Gordon Chua recently co-authored a paper about using algae to detoxify tailings ponds in the Alberta oilsands. Lab Technician Lindsay Clothier was a key member of the research team.Photo credit: Riley Brandt, University of CalgaryA research project underway at the University of Calgary aims to clean up oilsands tailing ponds by using native algae already found in them to do the job.

It's well known that oilsands mining produces pools of wastewater that are difficult to treat and pose a threat to the surrounding eco-system. The current methods oil companies are using to clean them are expensive. To try to provide possible solutions to both of these problems, a team of researchers in the biological sciences and geoscience departments came together to find a new "homegrown" approach to removing toxins from tailings ponds.

The team’s initial findings have determined that algae already present in individual tailings ponds can effectively break down some of the organic byproducts of oil and gas processing.

“Our goal was to try to clean up the tailings ponds,” explains Gordon Chua, an associate professor specializing in genetics and integrative cell biology. “There are a lot of toxins in them. There are ways to clean them, but none of these ways are cost-effective.”

Algae often considered a problem, not a solution 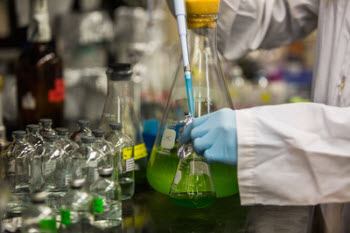 Initial findings have determined that algae already present in individual tailings ponds can effectively break down some of the organic byproducts of oil and gas processing.Photo courtesy of the University of CalgaryWhile algal blooms are usually brought to mainstream attention for their capacity to cause trouble, algae has traditionally been known to break down substances in bioremediation. So when Chua and his team decided to start their initial testing in 2009, they knew that their work had solid roots.

“Since some tailings ponds have high salt content, we guessed and ordered marine algae for testing with similar compounds to what’s found in tailings,” he says. “It worked to break down some of the organic byproducts.”

With a successful first step complete, Chua's team moved on to the next step of figuring out how to reproduce the results with algal species native to Alberta, which already grow in the tailings ponds. With initial funding from oilsands operators, Chua and the team began further research, which also included studying the impacts of oilsands process-affected water, or OSPW, on various test organisms to evaluate the effectiveness of remediation by algae.

After several tests using different nutrients to stimulate algal bloom growth in the tailings samples, phosphate proved to be the most effective. The team found that leaving the sample of tailings and native algae with added phosphate in sunlight for several weeks resulted in the breakdown of organic byproducts and reduction in toxicity of the water. The results of this study were recently published in the journal Environmental Science & Technology.

Related Article: Algae from Clogged Waterways Could Serve as Biofuels and Fertilizer

“If you can reduce the organic load in the water, which can be very corrosive and difficult to recycle, you can help the companies re-use the water. They’re recycling a lot already—over 90 per cent—but every little way helps,” Chua says.

“The challenge lies in: can we reproduce this on a large scale? Can we do it within a specific time requirement? And how can it be done cost-effectively?”

Next steps will assess long-term impact

Possible next steps for the team would be to collaborate with industry and conduct these studies in the field. Chua believes that the possibilities for his team’s findings could have far-reaching impacts. “A benefit of using algae is that using a little bit of phosphate is enough to get them going,” he says. “They produce their own food, and sugars, and can also sequester carbon dioxide to absorb greenhouse gases. Algae could also have biofuel content that could be harvested.”