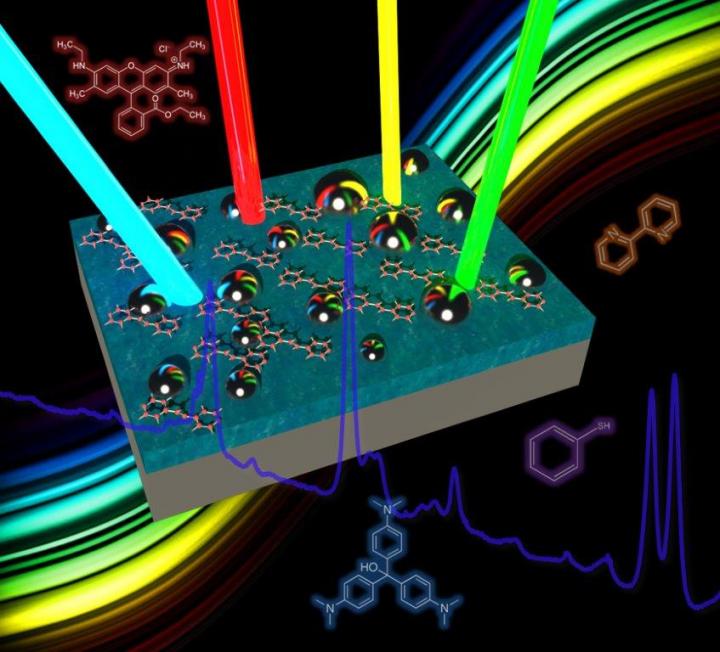 The technology (depicted above) consists of a thin film of silver or aluminum that acts as a mirror, and a dielectric layer of silica or alumina. The dielectric separates the mirror with tiny metal nanoparticles randomly spaced at the top of the substrate.Qiaoqiang Gan.From airport security detecting explosives to art historians authenticating paintings, society's thirst for powerful sensors is growing.

Given that, few sensing techniques can match the buzz created by surface-enhanced Raman spectroscopy (SERS).

Discovered in the 1970s, SERS is a sensing technique prized for its ability to identify chemical and biological molecules in a wide range of fields. It has been commercialized, but not widely, because the materials required to perform the sensing are consumed upon use, relatively expensive and complicated to fabricate.

That may soon change.

An international research team led by University at Buffalo engineers has developed nanotechnology that promises to make SERS simpler and more affordable.

"The technology we're developing - a universal substrate for SERS - is a unique and, potentially, revolutionary feature. It allows us to rapidly identify and measure chemical and biological molecules using a broadband nanostructure that traps wide range of light," said Qiaoqiang Gan, UB assistant professor of electrical engineering and the study's lead author.

When a powerful laser interacts chemical and biological molecules, the process can excite vibrational modes of these molecules and produce inelastic scattering, also called Raman scattering, of light. As the beam hits these molecules, it can produce photons that have a different frequency from the laser light. While rich in details, the signal from scattering is weak and difficult to read without a very powerful laser.

SERS addresses the problem by utilizing a nanopatterned substrate that significantly enhances the light field at the surface and, therefore, the Raman scattering intensity. Unfortunately, traditional substrates are typically designed for only a very narrow range of wavelengths.

This is problematic because different substrates are needed if scientists want to use a different laser to test the same molecules. In turn, this requires more chemical molecules and substrates, increasing costs and time to perform the test.

The universal substrate solves the problem because it can trap a wide range of wavelengths and squeeze them into very small gaps to create a strongly enhanced light field.

The technology consists of a thin film of silver or aluminum that acts as a mirror, and a dielectric layer of silica or alumina. The dielectric separates the mirror with tiny metal nanoparticles randomly spaced at the top of the substrate.

"It acts similar to a skeleton key. Instead of needing all these different substrates to measure Raman signals excited by different wavelengths, you'll eventually need just one. Just like a skeleton key that opens many doors," Zhang said.

"The applications of such a device are far-reaching," said Kai Liu. "The ability to detect even smaller amounts of chemical and biological molecules could be helpful with biosensors that are used to detect cancer, Malaria, HIV and other illnesses."

It could be useful identifying chemicals used in certain types of paint. This could be helpful detecting forged pieces of art as well as restoring aging pieces of art. Also, the technology could improve scientists' ability to detect trace amounts of toxins in the air, water or other spaces that are causes for health concerns. And it could aid in the detection of chemical weapons.

The National Science Foundation supported the research in a grant to develop a real-time in-vivo biosensing system. Gan shares the grant with Josep M. Jornet and Zhi Sun, both assistant professors of electrical engineering at UB.