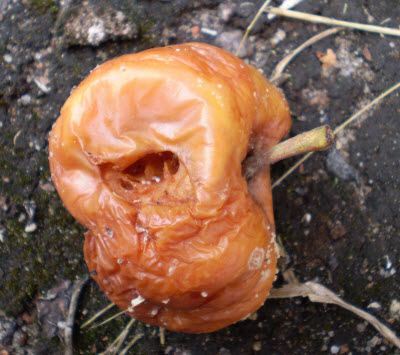 It's pretty easy to tell that this apple is rotten, however in cases where it's not so easy to detect food spoilage, scientists have developed degradation sensors for food packaging that let consumers know whether the product inside is safe to eat or not.Photo credit: Kulmalukko, Wikimedia CommonsCHICAGO – It’s just a matter of time before many different foods have “intelligent packaging,” a term used to describe package features that communicate information such as shelf life, freshness and quality, according to a presentation at a July 18 symposium at IFT16: Where Science Feeds Innovation, hosted by the Institute of Food Technologists (IFT).

“We need consumer-friendly sensors for products that say, “Hey, this food is fresh and safe to eat, or it isn’t,” says Claire Sand, an adjunct professor of packaging at Michigan State University and owner of Packaging Technology & Research. “We’re very close to being able to do for a multitude of foods.”

Intelligent packaging is already used on some medicines and food products, but it will become more widespread in the next few years due to the interest in reducing food waste, she says.

Time-temperature indicators have been around for a while and are widely used, especially on seafood packages to ensure the products are safe, she says. They take into account time and temperature which are tied to deterioration. For instance, fish or chicken left out on the counter will spoil faster than if it’s kept in the refrigerator or freezer, she says.

New degradation sensors work even better than time-temperature indicators because they actually measure products’ decay, Sand says. These sensors can be integrated into the packaging to detect spoilage and help reduce food waste. For instance, an entire package film may change color when certain chemical reactions, such as food decay, occur, Sand says.

Degradation sensors or time temperature indicators may also be small tags that change color when the product is no longer edible. In some cases, the bar codes fade so the food can’t be purchased, she says.

As the price of food increases, consumers increasingly need a way to assess the quality of the food they buy, she says.