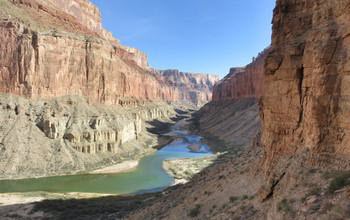 Sedimentary rocks of the Grand Canyon. This rock type contains high levels of nitrogen.Photo credit: Scott MorfordFor centuries, the thinking has been that all the nitrogen available for plant growth worldwide comes from the atmosphere. But a new study by National Science Foundation (NSF)-funded researchers at the University of California (UC), Davis, shows that more than a quarter of that nitrogen is derived from the weathering of Earth's bedrock.

The results, published this week in the journal Science, demonstrate that up to 26 percent of the nitrogen in ecosystems is sourced from rocks, with the remaining amount from the atmosphere.

"This research reveals important connections among the atmosphere, the biosphere, and the rocks at Earth's surface," said Richard Yuretich, a program director in NSF's Division of Earth Sciences, which funded the study.

The findings show that rock weathering is a globally significant source of nitrogen to soils and ecosystems, according to co-author and team leader Ben Houlton of UC Davis. "That runs counter to the centuries-long paradigm that has laid the foundation for the environmental sciences," said Houlton.

Rock-derived nitrogen may fuel the growth of forests and grasslands, and allow them to sequester more carbon dioxide than previously thought. Mapping the nutrient profiles in rocks for their carbon uptake potential could help drive conservation efforts, the researchers said.

Related Article: Reducing How Much Nitrogen Enters a Lake Has Little Impact on Algal Blooms

"Geology might have a huge control over which systems can take up carbon dioxide and which ones can't," Houlton said. "When thinking about carbon sequestration, the geology of the planet can help guide our decisions."

The work also helps solve the "case of the missing nitrogen." For decades, scientists have recognized that more nitrogen accumulates in soils and plants than can be explained by input from the atmosphere alone, but researchers couldn't pinpoint what was missing.

"We show that the paradox of nitrogen is literally 'written in stone,'" said co-author Scott Morford of UC Davis. "There's enough nitrogen in rocks, and it breaks down fast enough, to explain the cases where there has been this mysterious gap."

In previous work, Houlton and Morford analyzed rocks collected from the Klamath Mountains in northern California, and found that the rocks and the surrounding trees contained large amounts of nitrogen.

In the current study, they built on that work, analyzing the entire planet's nitrogen balance; the scientists developed a model to assess rock nitrogen availability on a global scale.

"These results are going to require rewriting textbooks," said Kendra McLauchlan, a program director in NSF's Division of Environmental Biology, which co-funded the research. "While there were hints that plants could use rock-derived nitrogen, this discovery shatters the paradigm that the ultimate source of nitrogen is the atmosphere. A discovery of this magnitude will open up a new era of research on this essential nutrient."