TALLAHASSEE, Fla. — National High Magnetic Field Laboratory (MagLab) scientists have demonstrated a way to improve the performance of the powerful but persnickety building blocks of quantum computers (called quantum bits, or qubits) by reducing interference from the environment.

Published today in the prominent journal Nature, this interdisciplinary collaboration between physicists and chemists may hasten the development of quantum computers.

Quantum computers are one of the holy grails of modern applied physics. Compared to today's computers, which rely on transistors to process "bits" of information in the form of binary 0s or 1s, quantum computers hold the promise of performing certain computational tasks exponentially faster. Their power could potentially dwarf that of today's machines, with huge implications for cryptography, computational chemistry and other fields.

Related Article: How do You Build a Large-scale Quantum Computer?

Such astounding feats are possible only in the "quantum" world of atoms and sub-atomic particles, where the physical rules governing how things behave are quite different from those of the "classical" world we live in. But the quantum phenomena that make quantum computers feasible are also the very reason they are extremely challenging to build. 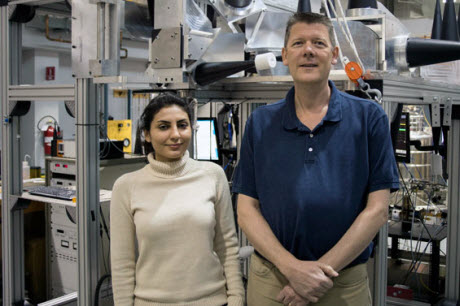 MagLab physicists Dorsa Komijani and Stephen Hill.Photo courtesy of the National High Magnetic Field LaboratoryThat's the paradoxical nut that a team of scientists, including physicists Dorsa Komijani and Stephen Hill, director of the MagLab's Electron Magnetic Resonance Facility, has spent years attacking. And while they have not broken that nut open entirely, they have made an important crack.

To understand their crack, it helps to first know a few basics about quantum mechanics.

While qubits can take many different forms, the MagLab team worked with carefully designed tungsten oxide molecules that contained a single magnetic holmium ion. The magnetic electrons associated with each holmium ion circulate either clockwise or counterclockwise around the axis of the molecule. These so-called spin states are analogous to the "0s" and "1s" of the computer you may be reading this on. But because we're in the quantum world, there's a bonus: the qubit can be in both the 0 and 1 states at the same time in what is termed a quantum superposition—a kind of heaven for decision-averse wafflers. In this case, the superposition involves a mix of the two spin states, with a spectrum of almost infinite possibilities between the fully clockwise and fully counterclockwise states. This is where the added computational power comes from.

Magnetic qubits can also interact with each other over relatively large distances using their magnetic fields, a phenomenon known as entanglement. In a useful quantum computer, large numbers of entangled qubits would perform in perfect unison. Unfortunately, the real world is full of magnetic disturbances (physicists call this "noise") that can also become entangled with the qubits, interfering with the calculations. It's like being interrupted when you're trying to do complex arithmetic in your head and having to start over. This breakdown is called "decoherence."

In the Nature paper, the MagLab team describes a new way to significantly reduce this decoherence in magnetic molecules.

It turns out that chemists can assemble molecules with special spin states that, when placed in a magnetic field, are immune to magnetic disturbances, similar to the way noise-canceling headphones allow you to listen to your favorite music in high fidelity. This sweet spot that allows qubits to interact without interference is called an atomic clock transition, or ACT. Atomic clocks rely on the same quantum physics principle to remain accurate.

The MagLab team was able to keep its holmium qubit working coherently for 8.4 microseconds—long enough for it to potentially perform useful computational tasks.

"I know 8.4 microseconds doesn't seem like a big deal," said Komijani. "But in molecular magnets, it is a big deal, because it's very, very long. But the important point is not the long coherence time; it's the approach that we used to get to this coherence time."

Now that the MagLab team has shown that ACTs can be used as a mechanism to make quantum computers work, it's up to chemists to tweak more molecules so that they are capable, under the right conditions, of creating a coherence sweet spot for qubits.

"That's why this is important," said Komijani. "We're saying, ‘See, we found this capability in molecular magnets. Now you guys, you chemists, go ahead and make stuff that has this capability so we can find the atomic clock transitions.'"

The Nature paper is part of a larger research effort expected to yield additional publications.

"We're just contributing a tiny, tiny amount of research," said Komijani. "But it's important because it's saying that you can play around with your qubit by changing the magnetic field it's in and moving from where the coherence is very low to the sweet spot, where it's very high."

The other contributors on the Nature paper are Muhandis Shiddiq, a postdoctoral associate in physics at the Technical University in Dortmund, Germany, and former MagLab grad student who is joint first author (with Komijani) on the study; and chemists Yan Duan, Alejandro Gaita-Ariño and Eugenio Coronado, all of the Institute of Molecular Science in Valencia, Spain.