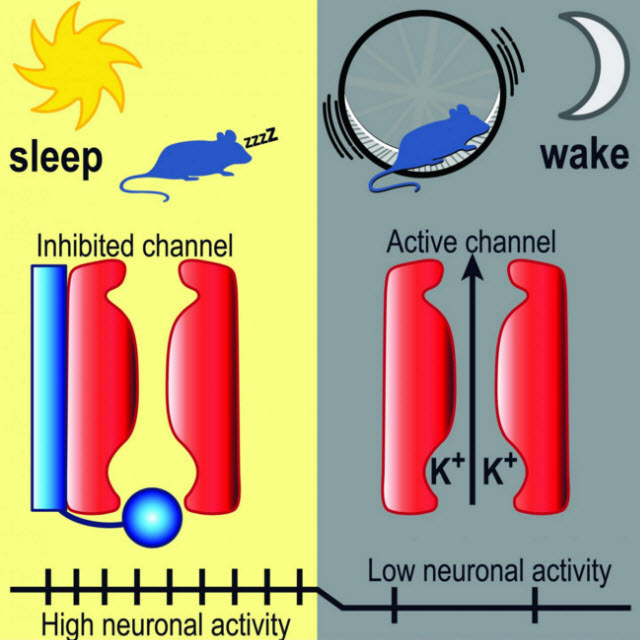 Mice sleep during the day, when BK channels should be inhibited. This daytime BK channel inhibition results in high neuronal activity that leads to sleep. At night, BK channels become active, passing potassium (K+) current, and lowering neuronal activity. Lower neuronal activity triggers wakefulness, and activities such as wheel running. The link between neuronal activity and the sleep/wake cycles is similar in humans, with one key difference: humans tend to be daytime animals, awake in the day and asleep at night.Image Courtesy of: Andrea Meredith

Falling asleep and waking up are key transitions in everyone's day. Millions of people have trouble with these transitions—they find it hard to fall asleep or stay asleep at night, and hard to stay awake during the day. Despite decades of research, how these transitions work—the neurobiological mechanics of our circadian rhythm—has remained largely a mystery to brain scientists.

Now, however, scientists at the University of Maryland School of Medicine (UM SOM) have identified the workings of a key pathway for these processes. The pathway that appears to play a key role in regulating the "switch" between wakefulness and sleep. This is the first study to elucidate this process in such biophysical detail.

Andrea Meredith, PhD, Associate Professor of Physiology at UM SOM, focused on a particular brain area, the suprachiasmatic nucleus in the hypothalamus. This region acts as the brain's internal clock, determining when we feel like going to sleep, how long we sleep, and when we feel like getting up. Within the suprachiasmatic nucleus, which is known as the SCN, she focused on certain ion channels, proteins that conduct electrical current, relaying information from one neuron to another. She focused on a group of channels known as BK potassium channels, which seem to be particularly active in the SCN.

Prof. Meredith examined normal mice, along with mice that had been genetically altered so that their BK channels could not be inactivated. She then recorded activity in these channels, via electrodes placed in SCN neurons. In the brains of the genetically modified group, the animals that could not inactivate their BK channels, she found lower levels of neuronal activity, which was associated with more daytime wakefulness. This was unusual, because mice generally sleep during the day.

The new findings are surprising, for several reasons. The researchers didn't know of any physiological process in the body that relied on BK channel inactivation as a mechanism. Scientists had known that the channel acted in this way, but didn't know how neurons used this mechanism to regulate information coding in the brain. This is the first study to show that BK channel inactivation is critical for encoding circadian rhythm in the brain.

Previously, BK channels had been known to be important for regulating other physiological functions. They are important for activating muscles, and play a prominent role in controlling blood pressure, heart rate, and bladder function. In the brain, BK channels have been known to be involved in regulating neuronal excitability, and play a role in motor control, learning and memory. In the brain, dysfunction in BK channels is associated with tremors, seizures, addiction, and problems with learning and memory.

"We knew that BK channels were widely important throughout the body," says Prof. Meredith. "But now we have strong evidence that they are specifically and intrinsically involved in the wake-sleep cycle. That's really exciting."

Also, in the past, scientists had thought that the day-night pattern of firing was largely driven by a different mechanism, the number of ion channels that exist on the surface of SCN neurons. The new paper showed that this model is too simplistic. The new study shows that the key is not the number of channels, but the fact that the channels are being activated, and more importantly, inactivated, at specific times of day.

The discovery has clinical implications. Prof. Meredith says the new understanding of the inactivation mechanism could potentially be used to develop drugs that target circadian rhythms. Such a medication could be used to treat sleep disorders, jet lag, and seasonal affective disorder, all of which involve problems with the SCN circadian clock.

About the University of Maryland School of Medicine