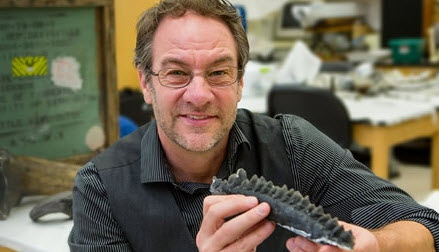 Biological Science Professor Gregory Erickson. Photo courtesy of Florida State UniversityWhen it comes to the three-horned dinosaur called the Triceratops, science is showing the ancient creatures might have been a little more complex than we thought.

In fact, their teeth were far more intricate than any reptile or mammal living today.

Florida State University Biological Science Professor Gregory Erickson and a multiuniversity team composed of engineers and paleontologists content that the Triceratops developed teeth that could finely slice through dense material giving them a richer and more varied diet than modern-day reptiles.

Erickson and the team outlined the findings of their study in the journal Science Advances.

Today, reptilian teeth are constructed in such a way that they are used mostly for seizing food — whether plant or animal — and then crushing it. The teeth do not occlude — or come together — like those of mammals. In essence they can't chew. The teeth of most herbivorous mammals self wear with use to create complex file surfaces for mincing plants.

"It's just been assumed that dinosaurs didn't do things like mammals, but in some ways, they're actually more complex," Erickson said.

Erickson, who has been studying the evolution of dinosaurs for years, became interested in looking at dinosaurs' teeth several years ago and suspected that they had some unique properties. But, the technology to really discover what they were capable of did not exist.

Krick is an assistant professor of mechanical engineering at Lehigh University and specializes in a relatively new area of materials science called tribology. Tribology is the science of how surfaces of materials interact while in motion.

The two of them, accompanied by scientists at University of Florida, University of Pennsylvania and the American Museum of Natural History, set out to find out what exactly these teeth were made of and how they worked.

Erickson had access to the teeth of Triceratops from museum specimens collected around North America. So, he began by cutting up a bunch of teeth to get a look at the interior.

He discovered that Triceratopsteeth were made of five layers of tissue. In contrast, herbivorous horse and bison teeth, once considered the most complex ever to evolve, have four layers of tissue. Crocodiles and other reptiles have just two.

"Each of those tissues does something," Erickson said. "They're not just there for looks."

While Erickson examined the tissue, he also sent samples to Krick to determine what each did and how they worked in concert to allow these animals to slice plants. Krick was able to mimic how plants moved across the teeth by scratching the teeth and measuring the tissue wear rates.

What Krick and his team of engineers, including Lehigh graduate student Mike Sidebottom, found was that the material properties of the teeth were remarkably preserved in 66 million year old teeth.

"If you took these dinosaurs' teeth and put them in a cow for example, they would work," Erickson said.

A sophisticated three-dimensional model was developed to show how each tissue wore with use in a strategic manner to create a complex surface with a fuller (a recessed area in the middle, much like those seen in fighting knives and swords) on each tooth. This served to reduce friction during biting and promote efficient feeding.

The 3D wear model developed for this project is inspiring new engineering techniques that can be used for industrial and commercial applications.

"Paleontologists challenged us with an interesting engineering problem, and now, we have a wear model that can be used to design material systems with optimized wear properties and surface features for many applications," Krick said.

The question that remains is how prevalent complex dental structure was among dinosaurs and other reptiles. Krick and Erickson intend to explore this further by examining other reptilian dental records and structures.

This work was funded by the National Science Foundation.