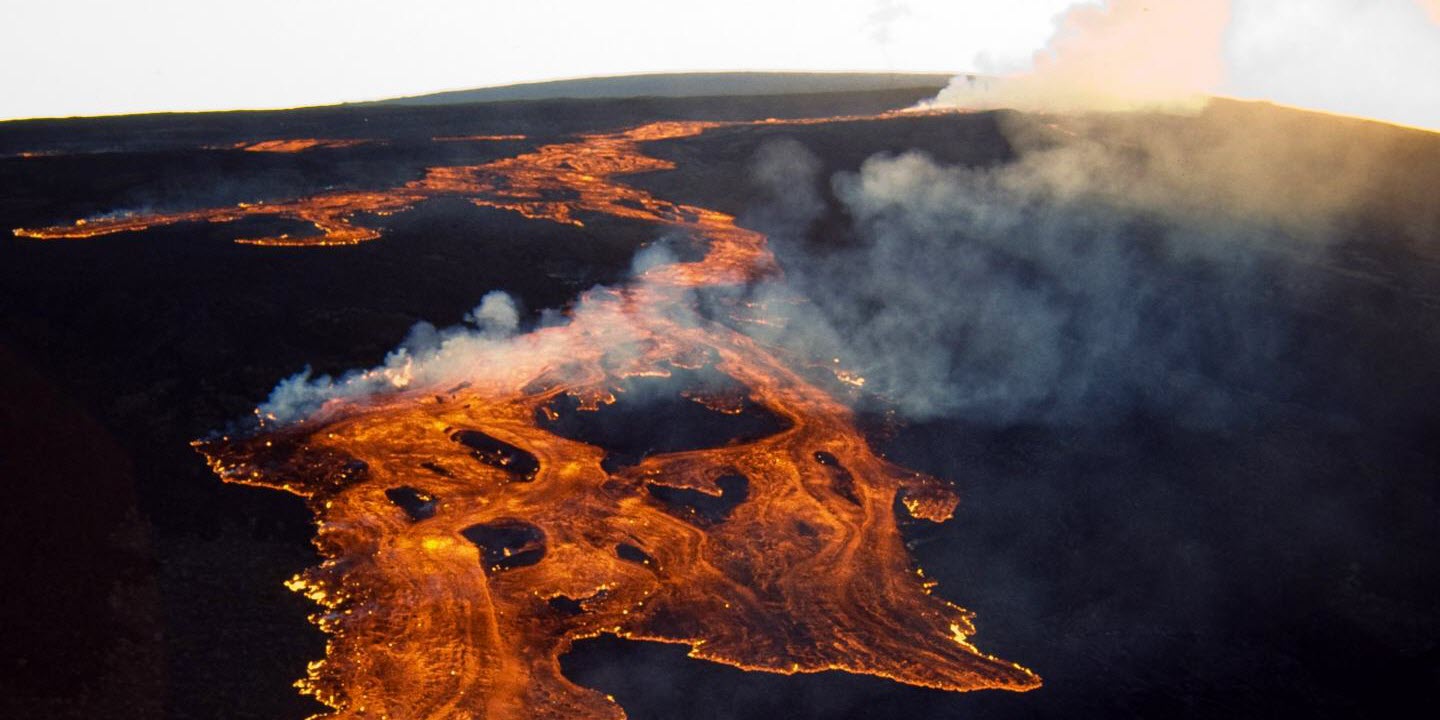 Standing 9 km tall from the base on the seafloor to the summit, Mauna Loa is the largest volcano on Earth.
USGS

MIAMI, FL — Scientists from the University of Miami (UM) Rosenstiel School of Marine and Atmospheric Science analyzed ground movements measured by Interferometric Synthetic Aperture Radar (InSAR) satellite data and GPS stations to precisely model where magma intruded and how magma influx changed over time, as well as where faults under the flanks moved without generating significant earthquakes. The GPS network is operated by the US Geological Survey's Hawaii Volcano Observatory.

"An earthquake of magnitude-6 or greater would relieve the stress imparted by the influx of magma along a sub-horizontal fault under the western flank of the volcano," said Bhuvan Varugu, a PhD candidate at the UM Rosenstiel School and lead author of the study. "This earthquake could trigger an eruption."

The researchers found that during 2014-2020 a total of 0.11 km3 of new magma intruded into a dike-like magma body located under and south of the summit caldera, with the upper edge at 2.5 - 3 km depth beneath the summit. They were able to determine that in 2015 the magma began expanding southward, where the topographic elevation is lower and the magma had less work to do against the topographic pressure. After the magma flux waned in 2017, the inflation center returned to its previous 2014-2015 horizontal position. Such changes of a magma body have never been observed before.

"At Mauna Loa, flank motion and eruptions are inherently related," said Varugu. "The influx of new magma started in 2014 after more than four years of seaward motion of the eastern flank—which opened up space in the rift zone for the magma to intrude."

Will the volcano erupt in the near future? "If magma influx continues it is likely, but not required," says Varugu. "The topographic load is pretty heavy, the magma could also propagate laterally through the rift zone."

"An earthquake could be a game changer," said Falk Amelung, a professor at the UM Rosenstiel School's Department of Marine Geosciences and senior author of the study. "It would release gases from the magma comparable to shaking a soda bottle, generating additional pressure and buoyancy, sufficient to break the rock above the magma."

According to the researchers there are many uncertainties. Though the stress that was exerted along the fault is known, the magnitude of the earthquake will also depend on the size of the fault patch that will actually rupture. Additionally, there are no satellite data available to determine movements prior to 2002.

"It is a fascinating problem," said Amelung, "We can explain how and why the magma body changed during the past six years. We will continue observing and this will eventually lead to better models to forecast the next eruption site."

Standing 9 km tall from the base on the seafloor to the summit, Mauna Loa is the largest volcano on Earth. In the 1950 eruption, it took only three hours for the lava to reach the Kona coast. Such rapid flows would leave very little time to evacuate people in the path of its lava. Another large eruption of Mauna Loa occurred in 1984.

The satellite data were acquired by the Italian Cosmo-Skymed satellites in the framework of the Geohazard Supersites and Natural Laboratories (GSNL) initiative of the Group on Earth Observation (GEO), an international umbrella organization to enhance the use of Earth Observation for societal benefits. Several space agencies pool their satellite resources to enable new studies of hazardous volcanoes. Other volcano supersites include the Icelandic, Ecuadorian, and New Zealand volcanoes as well as Italy's Mt. Etna.

- This press release was originally published on the UM Rosenstiel School website. It has been edited for style