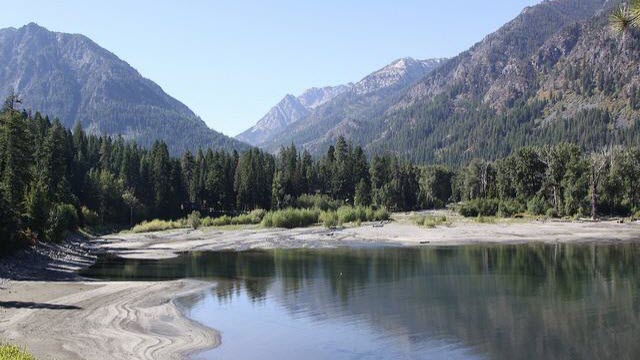 The year 2015 was the warmest on record for Oregon, resulting in low snowpacks and less water in many lakes and rivers. Pictured is Wallowa Lake in northeastern Oregon.Photo credit: Oregon State University

CORVALLIS, Ore. — A new study of long-term snow monitoring sites in the western United States found declines in snowpack at more than 90 percent of those sites—and one-third of the declines were deemed significant.

Since 1915, the average snowpack in western states has declined by between 15 and 30 percent, the researchers say, and the amount of water lost from that snowpack reduction is comparable in volume to Lake Mead, the West's largest manmade reservoir. The loss of water storage can have an impact on municipal, industrial, and agricultural usage, as well as fish and other animals.

Results of the study were published online on Mar. 2 in NPJ Climate and Atmospheric Science, a Nature publication.

"It is a bigger decline than we had expected," said Philip Mote, director of the Oregon Climate Change Research Institute at Oregon State University and lead author on the study. "In many lower-elevation sites, what used to fall as snow is now rain. Upper elevations have not been affected nearly as much, but most states don't have that much area at 7,000-plus feet.

"The solution isn't in infrastructure. New reservoirs could not be built fast enough to offset the loss of snow storage—and we don't have a lot of capacity left for that kind of storage. It comes down to managing what we have in the best possible ways."

The researchers attribute the snowpack decline to warmer temperatures, not a lack of precipitation. But the consequences are still significant, they point out. Earlier spring-like weather means more of the precipitation will not be stored as long in the mountains, which can result in lower river and reservoir levels during late summer and early fall.

The study considered data from 1,766 sites in the western U.S., mostly from the U.S. Department of Agriculture's Natural Resources Conservation Service and the California Department of Water Resources. The researchers focused on measurements taken on April 1, which historically has been the high point for snowpack in most areas, though they also looked at measurements for Jan. 1, Feb. 1, March 1, and May 1—which led to the range of decline of 15 to 30 percent.

They also used a physically based computer model of the hydrologic cycle, which takes daily weather observations and computes the snow accumulation, melting, and runoff to estimate the total snowpack in the western U.S.

"We found declining trends in all months, states, and climates," Mote said, "but the impacts are the largest in the spring, in Pacific states, and in locations with mild winter climates."

Related Article: Study on Impact of Climate Change on Snowpack

The Pacific states—California, Oregon, and Washington—receive more precipitation because of the Pacific Ocean influence, and more of the snow falls at temperatures near freezing. Because the Cascade Mountains, which transect the region, are not as steep as the Rocky Mountains, they have more area that is affected by changes in temperature.

"When you raise the snow zone level 300 feet, it covers a much broader swath than it would in the inland states," Mote said.

Mote was one of 12 lead authors on a chapter of the fifth Intergovernmental Panel on Climate Change report looking at the cryosphere, which is comprised of snow, river and lake ice, sea ice, glaciers, ice sheets, and frozen ground. Also an author on the fourth IPCC report, he had led a 2005 study on western snowpack levels that had also documented declines that were less dramatic than those in this new study.

"The amount of water in the snowpack of the western United States is roughly equivalent to all of the stored water in the largest reservoirs of those states," Mote said. "We've pretty much spent a century building up those water supplies at the same time the natural supply of snowpack is dwindling.

"On smaller reservoirs, the water supply can be replenished after one bad year. But a reservoir like Lake Mead takes four years of normal flows to fill; it still hasn't recovered from the drought of the early 2000s."

Mote said snowpack levels in most of the western U.S. for 2017-18 thus far are lower than average—a function of continued warming temperatures and the presence of a La Niña event, which typically results in warmer and drier conditions in most southwestern states.